What is the known complexity of this game? (similar to PushPush-1)

I've been looking at a few entries in http://library.msri.org/books/Book56/files/10demaine.pdf (on combinatorial algorithmic game theory). I didn't see the following game listed there, and I want to know if it has a name, and whether it's computational complexity has been studied:

A block sits on a starting position in a room containing a bunch of blocks, and an exterior agent can slide the block in any one of four directions (N, S, E, W). When it's moved, it slides in that direction until it is stopped by hitting a wall or a block.

For an illustration (not the sharpest, but the first I could find on Google), a student designed this game in the Scratch programming language: http://scratch.mit.edu/projects/StrykerV/1466085.

Specifically, I want to know if this game is NP-hard or PSPACE-complete. It seems that it should be, since it is similar to PushPush-1, but perhaps having only one moving piece makes it easier.

There are no sliding blocks, so the game is in $P$

Informally: from the starting position just mark the cells reachable by the cursor. The level has a solution iif the final position becomes reachable.

The algorithm is similar to the Dijkstra's algorithm for shortest path applied to the graph derived from the level. 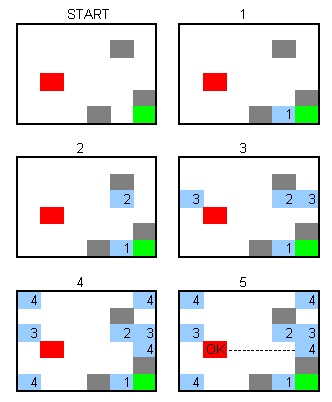 Let me know if you need further details.

Not the answer you're looking for? Browse other questions tagged cc.complexity-theory np-hardness combinatorial-game-theory or ask your own question.