I am reading a paper called "Rational Proof". It mentioned the following one-to-one reduction. I cannot google an introduction of it.

An excerpt from the paper. "Recall that a one-to-one reduction from a function $f$ to another function $g$ is a triple of polynomial time computable functions ($\alpha$, $\beta$, $\gamma$) such that:

Any reference for the formal definiton of the so-called "one-to-one reduction" is appreciated. Thanks.

The definition is composed of two parts. First, we want a reduction from $f$ to $g$. That's a way of computing $f$ given an oracle to $g$. This reduction is formed by two polytime functions $\alpha,\gamma$ which are used in the following way: $f(x) = \gamma(g(\alpha(x))$.

Second, we want the reduction to be one-to-one. That explains the if-and-only-if in (2). Moreover, for some reason we want an efficient one-to-one right-inverse $\beta$ of $\gamma$, satisfying $y = \gamma(\beta(y))$. The function $\beta$ can be used to answer the following question: what value of $g$ corresponds to a given value of $f$? (In contrast, $\gamma$ tells us what value of $f$ corresponds to a given value of $g$.) Why this is need will be apparent from the way the paper uses $\beta$.

The actual properties stated in the definition are slightly weaker (you want the function to be one-to-one only for values which actually occur in the formulas), but this is the gist of it.

If it helps, there is a formal definition of one-one reducibility on page 80 of "Theory of Recursive Functions and Effective Computability" (PDF here).

Following is my own understanding, which may be wrong. Thanks a lot for the comments.

The one-to-one reduction mentioned in the question is just another formulation of parsimonious reduction which applied to build #P-completeness. The following definition is from "Computational Complexity - A Conceptual Perspective" by Odede Goldreich.

So the triple $(\alpha,\beta, \gamma)$ in the paper actually defines the transition $g$ in terms of $\alpha$. 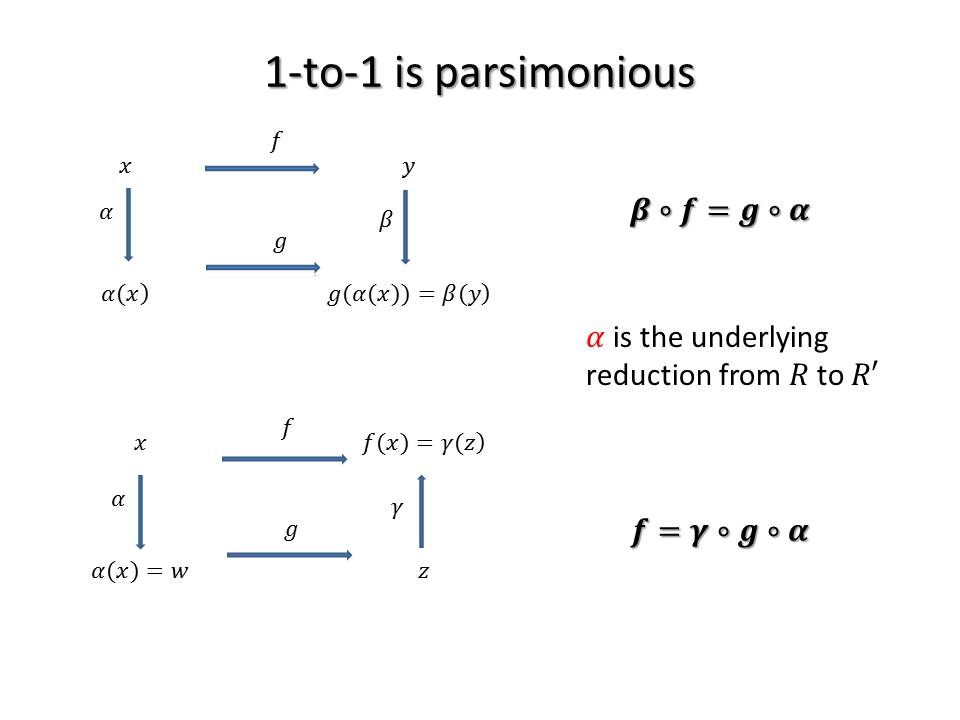 Not the answer you're looking for? Browse other questions tagged cc.complexity-theory reference-request terminology reductions or ask your own question.

15
Random monotone function
10
Finite One-Way Permutation with Infinite Domain
15
Theories which characterize classes of computational complexity
2
Is graph automorphism Karp-reducible to graph isomorphism under hidden subgroup representation?
2
What Is the Complexity of This Two-to-One Matching Problem?