What type of automaton is Google's Turing Doodle?

In celebration of Alan Turing's birthday, Google published a doodle showing a machine. What kind of machine is the doodle? Can it express a Turing Complete language?

There are obvious differences to the classical turing machine: a finite tape, constraints in how state can be connected,...

The doodle is still be available here

(The display on the top right shows the expected output.)

The tape in the middle is divided into squares that can hold a blank, a zero or a one. The head is positioned above one of the squares and is used for reading and writing.

Below the tape you can see a green arrow which you can click on to start the machine. There are two lines of circles next to it, some of which are connected. I will call them "states".

After the machine starts, the first state to the right of the green button lights up, then the next one to the right, and so on... Each state contains one of the following commands:

There is no way to "overlap" two jumps (one over another). The machine stops when there it leaves a state and there is no next state to the right of it.

I tried to build an Alan Turing's Doodle machine configuration that emulates the machine $M_4$ described in "Small Turing Machines and generalized busy beaver competition" that has a halting problem that depends on an open (up to my knowledge) Collatz-like problem. The full picture is available here.

... so even if the A.T.'s Doodle is perhaps not Turing complete (due to the non-overlapping left-only jump operator available only in the first row), it is powerful enough to walk the fine line of (un)decidability :-D

(I leave the previous answer above, because I'm not sure that this part is correct :-)

I think that even with a single left non-overlapping jump the Turing Doodle is Turing complete!. The (simple) idea is to use the tape itself to store the current state and use multiple cells to represent a larger alphabet.

For example a 2 states 8 symbols TM can be simulated using the following tape representation:

The Turing doodle can:

The full picture is available here.

In the same manner, given a $TM$ with an arbitrary number of states and alphabet symbols we can build an equivalent Turing Doodle machine $DM$.

It is my contention that these operations include all those which are used in the computation of a number. The defence of this contention will be easier when the theory of the machines is familiar to the reader. In the next section I therefore proceed with the development of the theory and assume that it is understood what is meant by “machine”, “tape”, “scanned”, etc.

This is an excerpt from the original Turing paper "On Computable Numbers, with an Application to the Entscheidungsproblem".

A modern good companion to the paper which I recommend is The Annotated Turing by Charles Petzold.

As you may see, Google just attempted to resemble a machine which is very similar to the Turing's description.

EDIT: Assuming the Google's T. M. complete alphabet is the one shown at the end of the game after clicking the bunny icon, and taking from the fact that it's producing an infinite sequence, got more rows and columns (so we may assume we can add any) , has left jumps (and also overlaping left jumps) at any row, has conditional and unconditional jump between adjacent rows, I think it's Turing complete.

In the puzzles, jumps are allowed on both lines, but they can't overlap. At the final rabbit-sequence doodle at the end of the game, they allow jumps on every line and they can be bracket nested so and [()] is allowed, but ([)] seems to not be allowed.

I will use the following assumptions:

With these assumptions, the Google Doodle Machine is Turing Complete.

I will show this by showing how to build the state system for any Turing machine (with a slightly non-standard definition). In each state the TM reads the input ($0$, $1$, or $\epsilon$), moves (left, right, or none) and then writes $0$ or $1$. The $n$th state is the designated halt state. 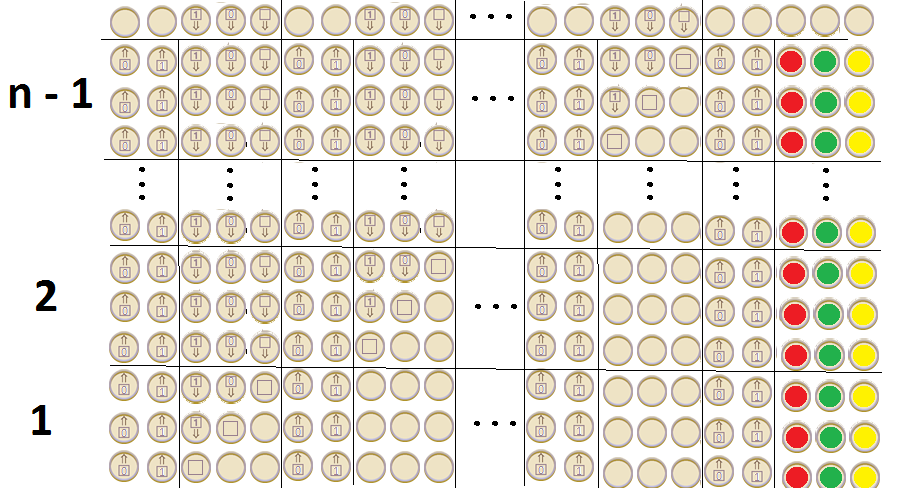 The GDM simulates the TM as follows:

Pick your favorite universal TM and implement it in the above procedure to get a universal GDM.

5
Is the Balanced Boolean Formula problem solvable in sublogarithmic space if the input has a tree structure?
5
Is there any research on Turing machines with transition relation homomorphic to given algebraic structure?
0
iterations of a $\epsilon$-FSM transducer on a tape as equivalent to a TM computation
6
Computing Functions with Dynamical Systems
8
Are all turing machines paths predictable?
6
Is $L \subset 1NL$ when $L \neq NL$?