In a resistor network, is there any relation between the shortest path and the maximum electric current path?

Consider a shortest path problem between the source $s$ and sink $t$ in an undirected weighted graph. There's a well known algorithm such as Dijkstra's algorithm that solves this problem.

Naturally, this graph can be considered as a resistive network where each edge $e$ with distance (or a cost) $d_{e}$ corresponds to a resistor with resistance $d_{e}$ or conductance $1/d_{e}$. From a physical point of view, assume that we send one unit of current from s to t, say by attaching $s$ to a current source and $t$ to ground. It will induce a certain electric flow in $G$ and this flow is unique. And the approximated solution (or the approximate electric flow) can be obtained in time $\tilde{O}(m)$ where $m$ is the number of edges in the graph.

My question: what is the relation between the shortest path in a graph and the path in an electric network where the max electric current flows? Is it true that two paths are always the same when there exists a unique shortest path from $s$ to $t$?

@MarzioDeBiasi: Thank you for the picture and actual current computation. But ironically, your answer only fortifies my conjecture about the shortest path and max current path. (I apologize for not explaining my conjecture clearly if that causes some confusion.)

Just an extended comment to include the picture: if the following (random) resistor network is valid then the max current flow 33.9mA is not on the shortest path from $s$ (+5V) to $t$ (GND). 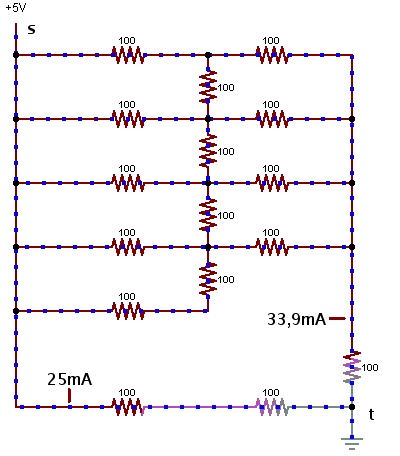 Your intuition is in a certain sense correct. By straightforward linear algebra we can find the electric potential of each node in the graph, given the net current from source to sink.

Now we can calculate the probability distribution of the path taken by the electric current through the graph. By the second law of thermodynamics, (that no process may independently cause a decrease in entropy,) it is impossible for electric current to independently flow from a lower to a higher potential, and even by the first law (conservation of energy,) it is impossible for current to flow between nodes of equal potential through a non-zero resistance. So every edge in the graph is directed from a higher to a lower potential, any edges of zero resistance are identified to a single node, and any non-zero-resistance edges between nodes of equal potential are eliminated. Thus the graph is directed and acyclic, and the path taken by the electric current from the source node to the sink node is a finite Markov chain, because we are confident that an electric current will take an independent and memoryless path through the given graph.

The Markov transition probability of each edge in the graph is then given by the ratio of the current through that edge to the total (gross, not net!) current flowing out from the same node:

where we have denoted the positive part of a parenthesized expression by a subscript "+". If we compute the self-information of each edge

then the shortest path weighted additively by self-information is indeed the most likely path taken by the electric current, and the current that actually traverses that entire path is equal to the total current times the product of the Markov transition probabilities of all the edges along that path.

Not the answer you're looking for? Browse other questions tagged graph-theory co.combinatorics spectral-graph-theory shortest-path or ask your own question.

10
Finding short and fat paths
1
Longest path among all pairwise shortest paths in unweighted undirected biconnected planar graphs
4
Can a flow be decomposed in a given number of paths?
1
Algorithm for Max Network Flow with lower bounds and its complexity
1
Max network flow with arbitrary source / sink
3
What is the proof that visibility graphs can be used to compute the shortest path?
2
Maximum difference between two shortest paths
0
Find the shortest s-t trail(edge disjoint path) in a graph with negative weight edges