Proofs, Barriers and P vs NP

It is well known that any proof resolving the P vs NP question must overcome relativization, natural proofs and algebrization barriers. The following diagram partitions the "proof space" into different regions. For example, $RN$ corresponds to the set of proofs that relativize and naturalize. $GCT$ (Geometric Complexity Theory) is of course the strictly outside region.

Name some proofs along with the best known regions they belong to. Place them in a best possible way i.e., if a proof is known to relativize, naturalize and algebrize then it should be placed in $RNA$ not just in $RN$. If a proof relativizes but does not naturalize it belongs to $R$ ${\setminus}$ $N$ and so on. 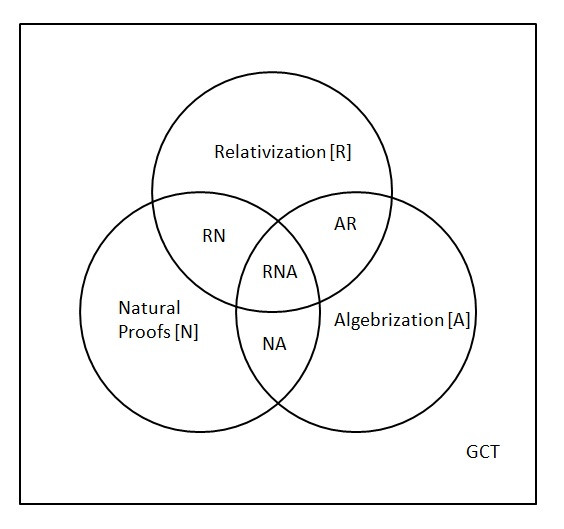 I think you need to redraw your Venn diagram... any containment of complexity classes which relativizes will also algebrize, at least in the sense of Aaronson and Wigderson. That is, access to the "low-degree extension" of an oracle is only more powerful than access to the oracle. Similarly, any oracles showing that a separation requires "non-algebrizing" techniques implies that "non-relativizing" techniques are also required.

Contrary to some claims earlier in this thread, algebrization in the sense of Aaronson & Wigderson is not known to subsume relativization. For example,

However, a recent work by Eric Bach and myself [2] gives a formulation of algebrization that does subsume relativization. Basically, if we take the AW notion of an algebraic oracle --- denoted as $\tilde O$ for some language $O$ --- and modify it wisely, then we can eliminate the pathologies such as $(\dagger)$ above.

P.S.: Another formulation for algebrization was proposed by Impagliazzo, Kabanets and Kolokolova earlier, which also places $\mathrm{R}$ inside $\mathrm{A}$, but is not known to be as powerful as the AW notion. See my paper with Eric for a comparison.

The time and space hierarchy theorems relativize. They are uniform, so they don't seem to naturalize.

I think indirect diagonalization results like the TimeSpace lower bounds of Lance Fortnow, et al. and also Ryan Williams's result do not relativize because they are not black box (but I am not sure about this). The proofs don't seem to naturalize since they use hierarchy theorems.

The proofs of permanent not in uniform $TC^0$ use hierarchy theorems and don't seem to work for nonuniform case, and doesn't seem to naturalize. On the other hand, I don't know if they relativize, they may with a suitable notion of relativization.

Interactive proofs do not relativize. I don't think they naturalize since they are uniform.

12
Does diagonalization captures the essence of class separation ?
23
Circuit lower bounds and kolmogorov complexity
16
Do the proofs that permanent is not in uniform $\mathsf{TC^0}$ relativize?
11
Has there been any result which does not have any Natural Proofs?
1
Statement that inequality of P and NP obstructs finding a proof of their separation
6
Quantum complexity separation evading the algebrization barrier?