what does “lifting” mean?

I see in certain places "lifting computation" or "lifting" mentioned. I haven't been able to accurately define for myself what is meant by that.

This usually comes up in computer science context. Any ideas what it means?

Computer science (especially theory B) has many connections to category theory, and that is the usual context for lifting. The basic idea is that you might have two objects $X$ and $Y$ that interact in a very intuitive way for you, and so it is easy to define a good morphism $f: X \rightarrow Y$. You might have a more complicated object $Z$ that is easy to relate to $Y$, but it is not obvious how it relates to $X$. So you will look at a morphism $g: Z \rightarrow Y$ and then use category theory to lift $f$ to $Z$ using $g$. 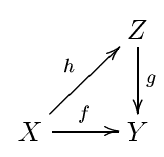 In other words, you will find a morphism $h: X \rightarrow Z$ such that $gh = f$. For more info, see these slides.

If I remember right, in the denotational semantics of programming languages, lifting is used an a rather abstract roundabout way to express partial correctness:

The so-called "lifting" of a state space $\Sigma$ is its disjoint union with a "bottom" symbol $\bot$, which typically represents a non-terminating or divergent state of computation. This is written, (again, if I remember right) $\Sigma^\bot=\Sigma\amalg\bot,$ and a (very simple) partial order is imposed on $\Sigma^\bot$ where $\forall \sigma\in\Sigma_\bot, \bot \le \sigma,$ but no two distinct states in $\Sigma$ proper are comparable.

So $\mathcal C'$ is a partially correct denotation of the semantics of command execution in the language. This is useful, for example, to express the semantics of a while loop with a loop invariant without regard to whether or not it would actually terminate, while additional machinery, namely a loop variant, would be necessary in order express the termination of a while loop.

Not the answer you're looking for? Browse other questions tagged reference-request terminology or ask your own question.

65
Applications of topology to computer science
116
What Lecture Notes Should Everyone Read?
2
how to formalize the class(?) of computational models and their equivalence
1
What do people mean by capabilities and capacities?
7
Which model of computation to simulate to prove universality?
14
Resources for mathematicians hoping to learn more computer science
17
Is intersection of $k \ge 3$ graphic matroids in P?