The complexity of the puzzle game Net

Net (known also as FreeNet, or as NetWalk) is a puzzle game played on a $n \times n$ grid with the following objects: 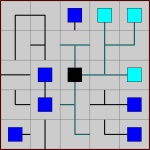 * Has the complexity of this game been studied?
* And/or do you see a quick reduction from a known similar NP-complete problem?

Eric Goles and Ivan Rapaport in "Complexity of tile rotation problems" prove that a similar problem is NP-complete but they use 5 tiles (we can assume that the Net game uses 4 tiles, because we can replace the central unit with a T-connector without changing the game structure), and in their proof loops are not forbidden.

Just a partial self-answer: I think the problem is NP-complete.

I found 3 gadgets (each one occupies $16 \times 16$ cells) that allows to build a Net game equivalent to a grid graph of degree $\leq 3$ and that should have a solution iif the original graph has an Hamiltonian cycle. The figure shows four different configurations of the gadget equivalent to a node with degree 3 (the full picture can be downloaded here). 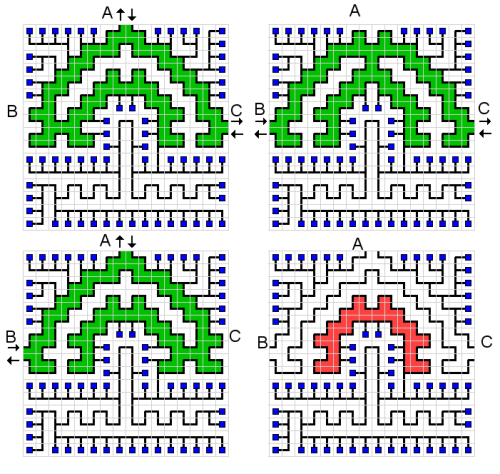 The gadget SHOULD have the following properties (I'll try to check them with a constraint solver):

The gadgets equivalent to nodes of degree 2 and 1 are similar (and we can also build "fill" gadgets to fill the holes of the original grid graph).

Now replacing the two central cells of one gadget with the central unit that sends the power on one direction and a terminal at the other endpoint, the game SHOULD have a solution iif the original graph has an Hamiltonian cycle.

Not the answer you're looking for? Browse other questions tagged cc.complexity-theory reference-request np-hardness puzzles or ask your own question.