Reasons for which a graph may be not $k$ colorable?

While reasoning a bit on this question, I've tried to identify all the different reasons for which a graph $G = (V_G,E_G)$ may fail to be $k$ colorable. These are the only 2 reasons that I was able to identify so far:

We can see the 2 reasons above as rules. By recursively applying them, the only 2 ways to build a non $k$ colorable graph which does not contain a $k+1$ clique are:

Is there any further reason, other than those 2 above, that makes a graph non $k$ colorable?

More precisely, what I need is some theorem of the form:

Hajós calculus, pointed out by Yuval Filmus in his answer, is a perfect example of what I am looking for, as a graph $G$ has chromatic number $\chi(G) = k + 1$ if and only if it can be derived from axiom $K_{k+1}$ by repeatedly applying the 2 rules of inference of the calculus. The Hajós number $h(G)$ is then the minimum number of steps necessary to derive $G$ (i.e. it is the length of the shortest proof).

It is very interesting that:

You should check the Hajós calculus. Hajós showed that every graph with chromatic number at least $k$ has a subgraph which has a "reason" for requiring $k$ colors. The reason in question is a proof system for requiring $k$ colors. The only axiom is $K_k$, and there are two rules of inference. See also this paper by Pitassi and Urquhart on the efficiency of this proof system.

A partial answer, in that I don't know a nice "reason" that can be generalised, but the following graph (shameless nicked from here): 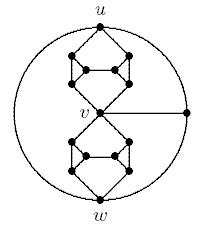 Isn't 3-colorable, but is obviously 4-colorable (being planar), and it contains no $K_{4}$, nor any cycle with a additional vertex connected to all the cycle vertices (unless I'm missing something, but the only vertices connected to a vertex and its neighbour are in the 3-cycles). Taking it further, you could apply a version of rule 2 to get a graph of chromatic number 5.

I would suspect that for any given genus, there's a graph of a certain minimum chromatic number (see the Heawood conjecture) that doesn't follow rules 1 or 2. Of course I have no proof other than intuition.

Lovasz found topological obstructions for k-colorability and used his theory to solve Knaser's conjecture. His theorem is the following. Let G be a connected graph, and let N(G) be a simplicial complex whose faces are subsets of V that have a common neighbors. Then if N(K) is k-connected (namely, all its reduced homology groups are 0 up to dimension k-1) then the number of colors needed to color G is at least k+3.

An important obstruction for a graph to be non k-colorable is that the maximum size of an independent set is smaller than n/k, where n is the number of vertices. This is a very important obstraction. For example it implies that a random graph in G(n,1/2) has chromatic number at least n/log n.

A more refine obstruction is that for every assignment of nonnegative weights for the vertices there is no independent set that capture a fraction 1/5 (or more) of the total weight. Note that this also include the "no clique obstructions." LP-duality tells you that this obstruction is equivalent to the "fractional chromatic number" of G being larger than k.

There are also obstructions for k-colorability of a different nature that sometimes go beyond the fractional chromatic number barrier. I will devote a separate asnwer to them.

Re your reformulation of the question as "More precisely, what I need is some theorem of the form: A graph $G$ has chromatic number $\chi(G)=k+1$ if and only if...":

I don't know whether you will think this is adequately explanatory, but it at least fits the syntax you request: an undirected graph $G$ has chromatic number $\chi(G)\ge k$ if and only if, no matter how you orient the edges of $G$, the resulting directed graph will include at least one directed path of length $k-1$. This is the Gallai–Hasse–Roy–Vitaver theorem.

Not the answer you're looking for? Browse other questions tagged graph-theory co.combinatorics graph-colouring clique or ask your own question.