What does "number of inputs to each neuron" mean in Neural Network terms? [closed]

Your question does not appear to be a research-level question in theoretical computer science. For more information about the scope, please see help center. Your question might be suitable for Computer Science which has a broader scope. 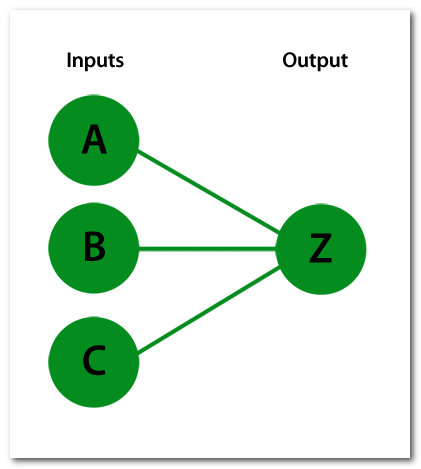 I think this is what a 3:1 network would look like (please correct me if I am wrong). Does 3 inputs per neuron mean that we will have 3 inputs to each of nodes A, B and C? In that case, what would the line connecting A to Z indicate? As in out of three inputs, how is a resultant chosen?

You are bypassing the "hidden layer": A neural network consists of three layers: Input layer, hidden layer, and output layer:

You may also have more than one hidden layer:

Though, in your case, since the number of hidden layers is not specified, it is safe to assume that there is just 1 hidden layer.

So, for example, in a 3:1 network, you have 1 output neuron, and 3 hidden neurons. The number of inputs shows the number of neurons in the input layer.

9
Purpose and determining when to use hidden layers

378
Algorithms from the Book
15
Quantum PAC learning
6
PageRank for a Non-Random Searcher
2
Maximum clique algorithm on undirected graph
4
Parameters of energy function for TSP
10
Can neural networks be used to devise algorithms?