Put the smallest elements of the lists in a new list $L$, then call the black box to sort it. The number in $L[1]$ (first and smallest element of $L$) will be the smallest number in $S$. We can put it in the first place of the output list.
Assuming the element has been chosen from $s_j$, we replace $L[1]$ with the second smallest element of sort list $s_j$, and again run the black box on it to compute the second smallest member of $S$.
We continue till all the elements are sorted. The total number of black box calls for this part will be $n - \sqrt n$. Therefore overall the total number of calls will be $n$.

On the other hand, it looks like we should be able to obtain a lower-bound using the lower-bound on the number comparisons needed for sorting as follows: We can implement the black box using $\sqrt n \lg \sqrt n = \frac{1}{2} \sqrt n \lg n$ comparisons. If we can solve the problem with $o(\sqrt n)$ calls to the black box and merging in linear-time we can sort $n$ real numbers with $o(n \lg n)$ comparisons which is impossible.

I guess we could prove that $\Omega(n)$ is a lower-bound for the number of calls to the black box, since lots of comparisons using in the black box would be shared and therefore are recounted in our argument.

UPDATE: As the the other posts suggest, an $\sqrt n \lg n$ is also achievable.

It's possible to sort with $O(\sqrt n\log n)$ calls to the black box and no comparisons.

First, consider the following balanced partitioning problem: given $m$ elements $A[1..m]$ (where $\sqrt n \le m \le n$), partition them into two groups, the smallest of size at least about $m/4$, so that all elements in the first group are smaller than all elements in the second group. This can be done with $O(m/\sqrt n)$ calls to the black box. (I'll describe that later.) Then use quicksort with this partitioning algorithm:

Do the partitioning step as follows:

I think your question was addressed in Beigel and Gill's paper "Sorting n objects using k-sorter" from 1990 and the abstract of the paper says it all:

It is possible to sort obliviously with $O(\sqrt{n}\log n)$ calls to the black box, each applied to a contiguous subarray of the original input. The algorithm never touches the input data except through black-box calls. In particular, the same sequence of black-box calls is only a function of $n$, not the actual input data (hence "oblivious").

Here is a sketch of a simpler algorithm, which uses a black box that sorts subarrays of size $k$ instead of just $\sqrt{n}$. The total number of calls to the black box is roughly $2(n/k)^2$. For notational simplicity, assume that $k$ is even and $2n/k$ is an odd integer. 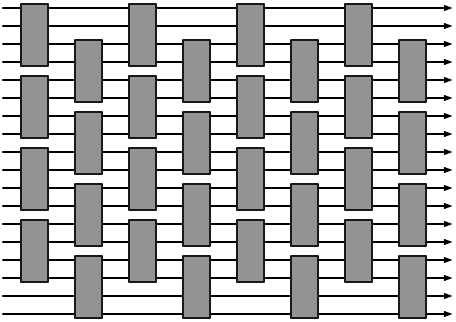 As the figure hopefully suggests, this algorithm breaks the input array into chunks of size $k/2$, and then applies bubblesort to the chunks, using the $k$-sorter in place of a compare-exchange operation. Correctness follows by observing that the network correctly sorts any array of 0s and 1s.

As @VinayakPathak's comment suggests, the $O((n/k)^2)$ bound can be reduced by replacing bubblesort with a different sorting network. For example, Batcher's even-odd mergesort reduces the number of black-box calls to $O((n/k)\log^2(n/k)) = O(\sqrt{n}\log^2 n)$, and the AKS sorting network reduces it to $O((n/k)\log (n/k)) = O(\sqrt{n}\log n)$. This last algorithm matches Neal's non-oblivious algorithm up to (large!!) constant factors.