Small graph with gap between chromatic and vector chromatic number?

($G$ has vector chromatic number $q$ if there is an assignment $x\colon V \rightarrow \mathbf R^d$, where intuitively the vectors associated with neighbouring vertices are far apart. The requirement is $\langle x(v), x(w)\rangle \leq -1/(q-1)$. For example, for $q=3$, the vertices of a triangle suffice.)

Is there a smaller example? A tempting avenue would be to provide a concrete vector 3-colouring of the Chvatal or Grötzsch graph, if such a beast exists.

($\chi_v$ need not be an integer, but it would be nice. Update: As pointed out below, the nonintegral case is indeed easy. Thanks.)

I couldn’t resist thinking about vector 3-colouring the Chvátal and Grötzsch graphs.

The Grötsch graph can be vector 3-coloured as follows: Put the degree five node on the North pole. The 5 degree-4 nodes are evenly placed on the same latitude, around 77 degrees from North: imagine a pentragram painted on Earth’s northern hemisphere. The remaining 5 nodes (of degree 3) end up on the Southern hemisphere, around 135 degree from North. The have the same longitude as the 5 others. (I’ll upload a drawing when I have one, but it’s harder to draw geodesic lines in TikZ than I thought.)

According to an SDP solver, Chvátal also admits a vector 3-colouring, but the output is just a bunch of vectors in 5 dimensions that I have difficulties interpreting.

(A third attempt failed: Inspired by Yury’s construction, take the 5-cycle and add an apex vertex adjacent to all the others. This graph has chromatic number 4. But according to my solver it is not vector 3-colourable.)

Here it an embedding of the Grötzsch graph on the unit sphere: 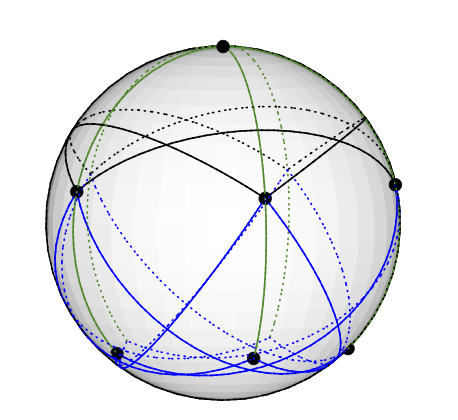 This corresponds to a vector colouring in the obvious way; e.g., the vertex at the North pole is coloured with the vector (0,0,1).

N is connected to its 5 neighbours on the Southern hemisphere with green edges. (Note that the green edge looks as if it is incident on the degree 4-vertices on the Northern hemisphere, but that’s an artefact of the embedding.)

Viewed from the top, you can make out the pentagram described by the degree 4 nodes, similar to Lovasz’ embedding of $C_5$ in the plane: 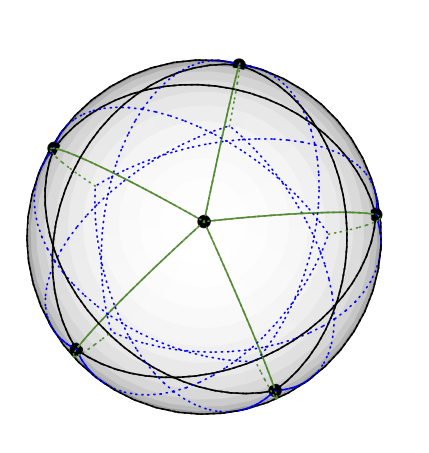 Finally, a view from above the South pole: 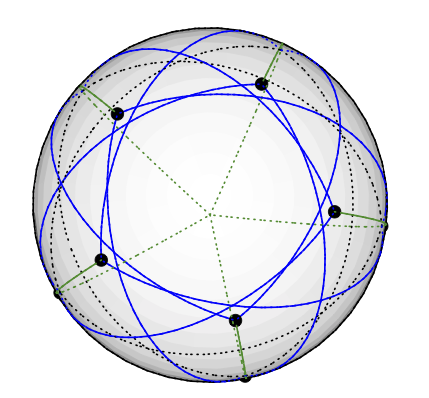 If my calculations are to be believed, all neighbouring vertices are at more than 120 degrees from each other, so this constitutes a valid vector 3-colouring. The Grötzsch graph is 4-chromatic. 11 vertices, 20 edges. I’m particularly happy about this example because the vector colouring is in 3 dimensions, to you can visualise it. (And draw random hyperplanes in order to explain the KMS graph colouring algorithm.)