Firstly I wanted to ask. If I have a undirected graph and split all the edges into two directed edges is it still called directed or does it become bi-directed? 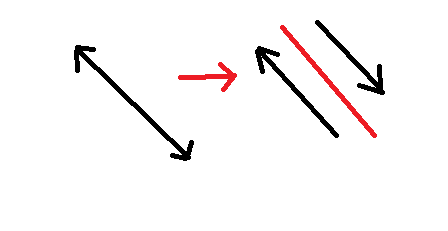 The main question is i have a graph with n sources all in the same graph until now I thought I could use the mssp method provided by Klein in this paper but it says that the graph must be a directed graph. Yet if I have an undirected graph and split each edges into two components with same weight I don't think it will be able to solve the problem or it does not matter?

Also I wanted to make sure does this method gets all the shortest path trees? because i was getting confused.

Klein algorithm is able to compute all the shortest path trees for specific starting nodes found on a single face (lets agree on that). Its secret is that it will do adaptations of specific darts found in the dual graph. if it is an undirected graph turning it into directed graph will become a bi directed graph by the following: can you still state that such graph is directed and also bi directed?

A directed graph is called bi-directed if the there is a mapping reversal() that maps each edge e=(v,w) to a reversal edge (denoted as reversal(e)) such that the following holds:

Each edge e occurs as the reversal edge reversal(e') of a different edge e', that is, the mapping is bijective.

First, let's be completely clear about the definition of the multiple-source shortest path problem. The input consists of the following:

An explicit representation of these shortest-path trees would require $\Theta(kn)$ space, where $k$ is the number of vertices in $f$; in the worst case, this space bound is $\Theta(n^2)$. Klein's observation, at least intuitively, is that the shortest-path trees for two adjacent source vertices are nearly identical; his data structure stores only the differences between adjacent trees.

Klein's algorithm does not compute shortest-path distances between arbitrary pairs of vertices; in every pair, the source vertex must lie on the designated face. For a solution to the more general problem, see Sergio Cabello's paper "Many distances in planar graphs" [SODA 2006 and Algorithmica 2012].

You might also check out my upcoming journal paper with Sergio Cabello and Erin Chambers, which describes a different multiple-source shortest-path algorithm, which also works for higher-genus graphs.

Not the answer you're looking for? Browse other questions tagged graph-theory graph-algorithms shortest-path or ask your own question.