Is there a reduction to "door and pressure plate" games that doesn't explode solution length?

This paper gives a proof that in a game with doors and pressure plates, it is PSPACE-hard to determine whether or not the (player's) avatar can reach a given location. This is proven by a reduction from TQBF, and the length of the resulting solutions depends exponentially on the number of universal quantifiers in the formula.

Perhaps you can easily simulate a LBA; the idea is the following:

A cell gadget is sketched in the figure below. 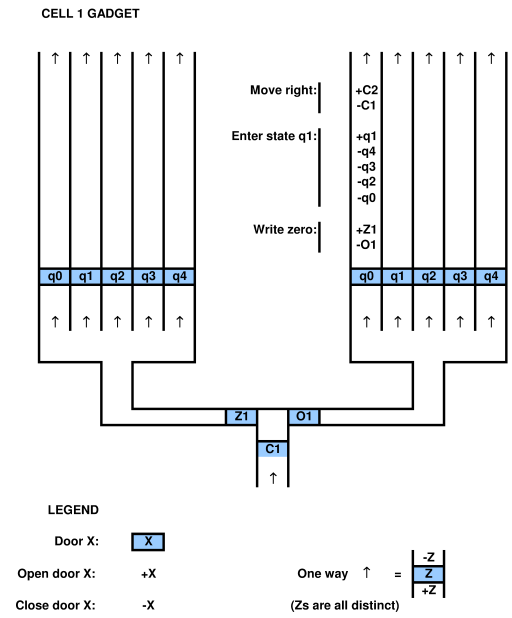 Non-deterministic choices can be realized splitting the corridors in the control structures into two or more sub-corridors as shown in the figure below. 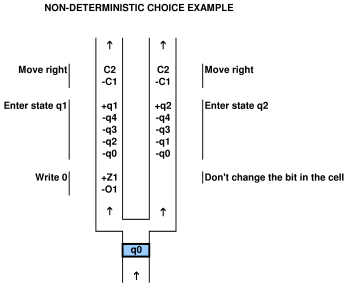 Note: if a plate can only open/close a single door, then you can add an auxiliary structure with (long) one way corridors that (de)activates the distinct state doors of each cell.

In this case it is sufficient to use an horizontal series of vertical corridors-pairs. The state of each pair of corridors represents the direction (inward/outward) of an edge in the original constraint graph. It is sufficient to simulate the AND gadget and OR gadget, like sketched in the figure below. 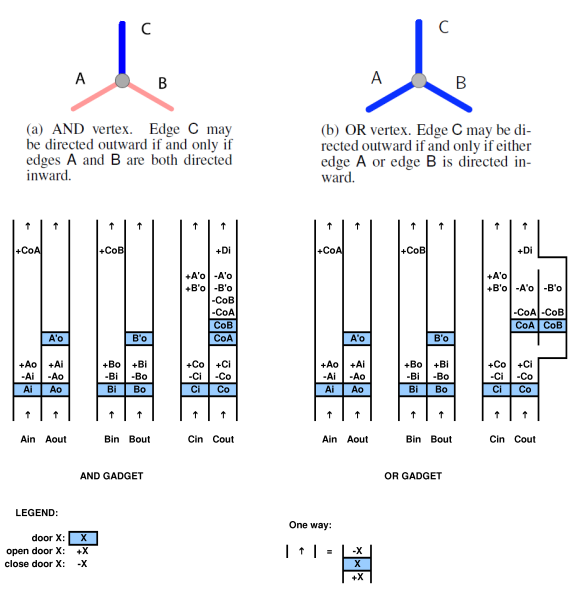 this type of research of relating video games to computational complexity is quite intriguing but it is also quite new, generally less than a decade old. I will argue here there is subtlety that is sometimes being missed in the current analyses [have not seen/noticed this pointed out in the cited paper or other papers so far] and that impedes answering the stated question definitely.

however, here is the subtlety. in a given game, the layouts of the game are basically fixed. in video game design the concept of different layouts is called "layout design" and is not a "given" of all games. for example in the groundbreaking game Doom, the level design tools were open-sourced ie made available to players to use. in other words arbitrary level design can be regarded as part of the game. but in other games considered in papers, the video games as originally built have fixed levels. the papers are sometimes not explicitly taking this into account.

therefore there is a strong argument to be made that in most games without level design, or random layouts, levels are fixed, and this has a big impact on the actual complexity of solving the "game". ie, what exactly is the "game"? does it include random layouts, and/or level design possibility? is level design part of the computational mapping? these issues are glossed over somewhat in current papers.

taken to the opposite extreme of the papers, one could argue that all real video game implementations are solvable by FSMs because they have finite memory!

for there to be real computational mappings, basically one must generalize the game to involve

a slightly similar mapping issue arises in CA/Cellular Automata research where there are ideas about using infinite periodic patterns on the CAs as "starting patterns" to prove TM equivalence/completeness.

so in general your question is not strictly defined until you clarify better (ie more formally/mathematically define) what you mean by "in a game with doors and pressure plates" and in a way that even the paper does not apparently strictly define, esp wrt to ideas about level design, unlimited size levels, etcetera. but notice that the "games" defined with these features then have been abstracted away from the actual/real video games in a very significant way.

so in short I think this is interesting/worthwhile research, even though starting out as somewhat informal, and deserves further advancement, but to some degree its formalization must be made more strict esp in basic definitions if it is to advance further. it must make a more strict/formal/transparent distinction between the implementations and the abstractions.

5
Is there any natural Karp reduction from Independent Set problem to SAT?
2
Is there simple reduction Dominating Set to Vertex Cover?
7
Is there a gadget that reduces generalized geography to undirected graphs?
4
Verifying that a reduction is correct
5
Is there a notion of "inevitable reduction?"
7
Determining if a word of specific length exists that is not accepted by a NFA