A small C-like language that turing machines can simulate

Papadimitriou uses RAM machines for this job, but I fear that comparing something strange (as a turing machine) to another strange thing (basically, an assembly language) would be too unconvincing for many students.

I'm thinking right now about how to convince myself that Turing machines are a general model of computation. I agree that the standard treatment of the Church-Turing thesis in some standard textbooks, e.g. Sipser, is not very complete. Here is a sketch of how I might go from Turing machines to a more recognizable programming language.

Consider a block-structured programming language with if and while statements, with non-recursive defined functions and subroutines, with named boolean random variables and general boolean expressions, and with a single unbounded boolean array tape[n] with an integer array pointer n that can be incremented or decremented, n++ or n--. The pointer n is initially zero and the array tape is initially all zero. So, this computer language can be C-like or Python-like, but it is very limited in its data types. In fact, they are so limited that we do not even have a way to use the pointer n in a boolean expression. Assuming that tape is only infinite to the right, we can declare a pointer underflow "system error" if n is ever negative. Also, our language has an exit statement with one argument, to output a boolean answer.

Then the first point is that this programming language is a good specification language for a Turing machine. You can easily see that, except for the tape array, the code only has finitely many possible states: The state of all of its declared variables, and the current line of execution, and its subroutine stack. The latter only has a finite amount of state because recursive functions are not allowed. You could imagine a "compiler" that creates an "actual" Turing machine from a code of this type, but the details of that are not important. The point is that we have a programming language with pretty good syntax, but very primitive data types.

The rest of the construction is to convert this to a more livable programming language with a finite list of library functions and precompilation stages. We can proceed as follows:

At this point, the construction has enough features of a high-level programming language that further functionality is more the topic of programming languages and compilers rather than CS theory. It is also already easy to write a Turing-machine simulator in this developed language. It is not exactly easy, but certainly standard, to write a self-compiler for the language. Of course you need an outer compiler to create the outer TM from a code in this C-like or Python-like language, but that can be done in any computer language.

Note that this sketched implementation not only supports the logicians' Church-Turing thesis for the recursive function class, but also the extended (i.e., polynomial) Church-Turing thesis as it applies to deterministic computation. In other words, it has polynomial overhead. In fact, if we are given a RAM machine or (my personal favorite) a tree-tape TM, this can be reduced to polylogarithmic overhead for serial computation with RAM memory.

The LLVM compiler allows one to fairly straightforwardly "plug in" a new architecture. They call this writing a new back-end, and give detailed instructions and examples for how to do it. I suspect that you will have to jump through some hoops with respect to random access memory, if you do not wish to target a RAM Turing machine, but this is definitely doable, as I've seen a number of projects that cause LLVM to generate VHDL or other very different machine languages.

This would have the interesting effect of having a state-of-the-art optimizing compiler (in many ways LLVM is more advanced than GCC) generating code for a Turing machine.

I am not in the cs theory but I have somethint which might be usefull. I have taken another approch. I designed a simple processor directly programmable with a small sub-set of C. There is NO assembly code, only C-like code. You could use use the same tool I used and modify this processor to design your Turing machine simulator. It took me 4 days to design, simulate and test this processor, well a few instructions! The Tools I used even enabled me to generate real VHDL synthetizable code. It is a true working processor. 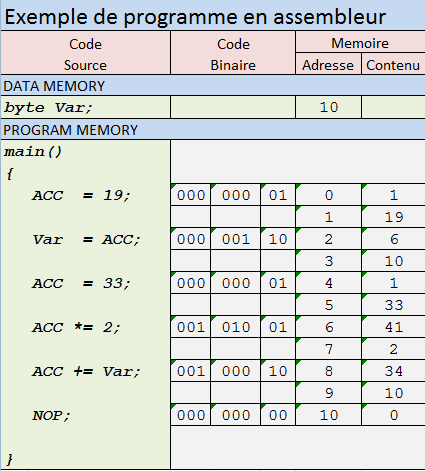 Here is a picture of the processor using theses Tools.: 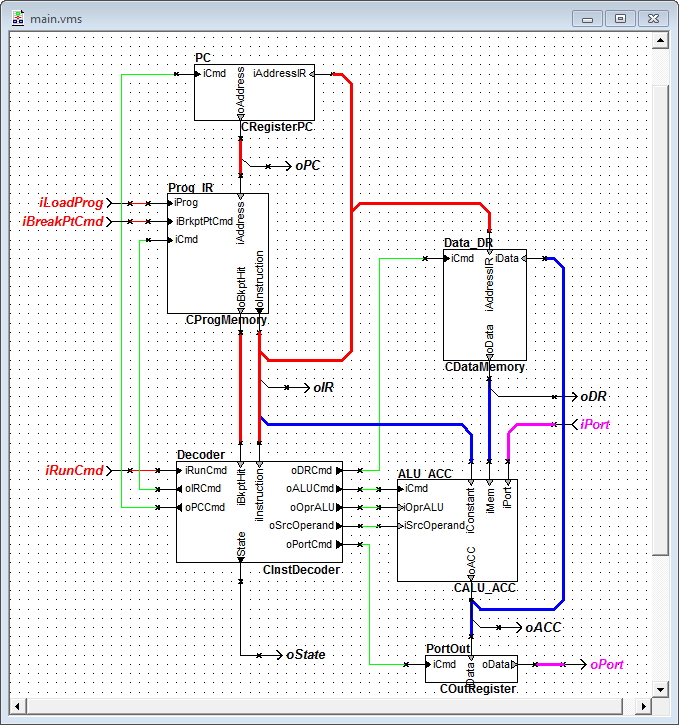 The Tools "Novakod Studio" uses a High Level Language Hardware Description Language. As an example, here is the code of the program counter: 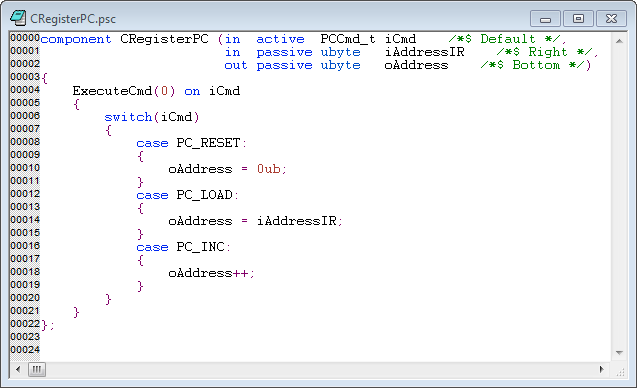 What regards to the RAM-machine, then there exists a demo project, where a 32bit CPU is simulated by an 8bit microcontroller and the simulated 32bit CPU boots Linux. Slow as hell, but according to the author, Dmitry Grinberg, it worked. Maybe the Zylin CPU (GitHub user zylin) might be a viable choice for the simulatable RAM-machine. Another RAМ-machine candidate might be the ProjectOberon dot com by Niklaus Wirth.

(The "dot" and "com" in my text are due to the fact that I just, 2015_10_21, registered my account at the cstheory.stackexchange and the web-app does not allow more than 2 links for novice users, despite the fact that they can automatically see from my other stackexchange accounts that I might be stupid, but I'm not a troll.)

Not the answer you're looking for? Browse other questions tagged turing-machines or ask your own question.

5
Turing Machines and Subroutine Simulation
16
Can chess simulate a Universal Turing Machine?
20
If an abstract machine can simulate itself, does that make it Turing complete?
11
Does P contain incomprehensible languages? (TCS community wiki)
11
Are there non-constructive proofs of existence of "small" Turing machines / NFAs?
20
A total language that only a Turing complete language can interpret
13
Looking for Literature Source for Following idea
1
How come Wikipedia says that Random Turing Machines can provide uncomputable output?