The idea of the algorithm is to have each writer announce each value it desires to write to all the readers, by writing it in its own (single-writer multi-reader) registers; each reader reads all the values written by the writers and picks the most recent one among them.

The algorithm uses vector clock to compare the values written by the writers and find the most recent one among them. The pseudocode appears in Figure 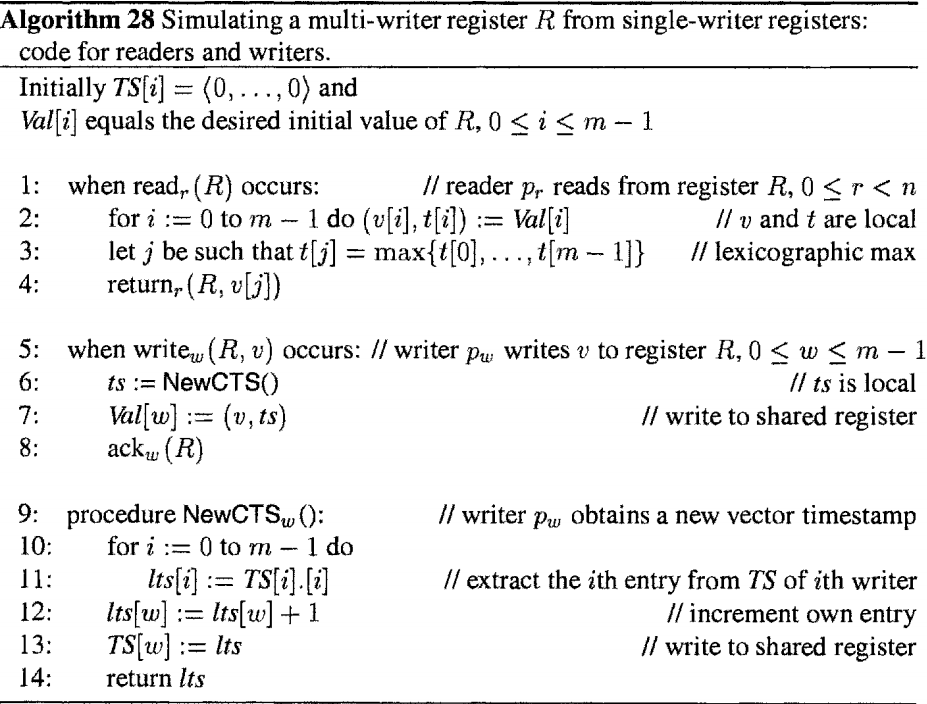 There are two types of operations in the algorithm:

As the last paragraph indicated, we consider the schedule of high-level operations. So my problem is:

To illustrate, consider the following admissible (according to the simulation algorithm) execution:

In the linearizability proof, the $m$ high-level writes will be put in an order, for example, according to their pids. However, if we consider the low-level operations in such order, the second writer cannot obtain $\langle 0, 1, 0, \ldots, 0 \rangle$. Instead, it should obtain $\langle 1, 1, 0, \ldots, 0 \rangle$, because it is put after the first writer's high-level write operation.

Problem: I am confused about the situation. What is wrong of my argument? Should the schedule respect the linearizability of low-level operations in simulation algorithm? Or, what does it mean to respect it?

I understand the proof as follows. Start with an arbitrary execution of the above algorithm. In this execution each operation on $TS[i]$ and $Val[i]$ has already been linearlized by assuming that these are single-writer multi-reader atomic registers. Therefore, by assumption, the schedule linearizes these low level operations.

The remainder of the proof shows that there exists some unique assignment of distinct times for each high-level operation such that the following are true.

Not the answer you're looking for? Browse other questions tagged dc.parallel-comp dc.distributed-comp concurrency or ask your own question.

1
How to Define and Implement (Single-Writer) K-Atomic Snapshot Object?
4
Is This Scheduling Problem NP-Hard?