Books on automata theory for self-study

I need a finite automata theory book with lots of examples that I can use for self-study and to prepare for exams.

I, however, like "Introduction to the Theory of Computation" (by Sipser). It is very well written, and is a relatively new book.

I have a soft spot for Automata & Computability by Dexter Kozen (table of contents and sample chapters [PS]). It is quite thorough and covers some really interesting advanced topics. The proofs are formal and explicit and the notation and formatting are lovely. Most importantly, the exercises are excellent, so depending on the level of your exams it will be good study material.

The one I'm using the most for my courses is Elements of Automata Theory by Jacques Sakarovitch, Cambridge University Press, 2009. Its scope might be a bit different from the others', as it also extensively covers algebraic aspects, formal power series, and transductions. And there are many exercises.

"Problem Solving in Automata, Languages, and Complexity" by Du-Ko is one of my favorites after Sipser , HU and Kozen. It contains many solutions to the *rd problems of Kozen and sipser with numerous examples and related exercises. Specially useful for exam preparation.

"Applied Combinatorics on Words", by Lothaire, 2004

Is far and away my favorite. Loads of examples, and also builds up from the absolute basics all the way to some pretty interesting automata applications like Automatic Speech Recognition with Weighted Finite-State Transducers, and topics in bioinformatics.

Best of all, it's free to download, and also includes solution sets:

I'm not sure this is the best book to prepare for exams, but the book

Finite Automata; Behavior and Synthesis by B. A. Trakhtenbrot and Ya. M. Barzdinʹ

is quite good. It has a surprising number of great results that I have found especially helpful in research.

Handbook of Automata Theory: Volumes I (Theoretical Foundations) and II (Automata in Mathematics and Selected Applications) 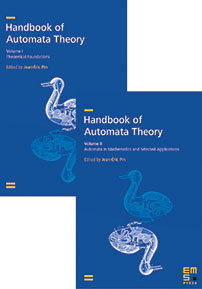 A publication of the European Mathematical Society

Automata theory is a subject of study at the crossroads of mathematics, theoretical computer science, and applications. In its core it deals with abstract models of systems whose behaviour is based on transitions between states, and it develops methods for the description, classification, analysis, and design of such systems.

The Handbook of Automata Theory gives a comprehensive overview of current research in automata theory and is aimed at a broad readership of researchers and graduate students in mathematics and computer science.

Volume I is divided into three parts. The first part presents various types of automata: automata on words, on infinite words, on finite and infinite trees, weighted and maxplus automata, transducers, and two-dimensional models. Complexity aspects are discussed in the second part. Algebraic and topological aspects of automata theory are covered in the third part.

The two volumes comprise a total of 39 chapters, with extensive references and individual tables of contents for each one, as well as a detailed subject index.

Graduate students and researchers interested in mathematics and computer science.

Introduction to languages and The theory of computation

I highly recommend this book for a beginner and this is a perfect choice for someone who's looking for lots of examples.

I enjoy the following lecture notes by Jarkko Kari: http://users.utu.fi/jkari/automata/

There is also Elements of the Theory of Computation by H.Lewis and C.Papadimitriou. It's a well written introduction to automata theory.

From Simple Machines to Impossible Programs

It does cover a lot of stuff, which includes automata theory. The examples are presented in Ruby, and they are pretty easy to understand. You may need another book if you want to delve deeper into theory, but this one is great to learn the basics.

" Formal Languages And Automata Theory " by A.A. Puntambekar is the best book for solved examples. Most of the book contains only solved examples and little theory. Its good to pass the exams.

268
What Books Should Everyone Read?
2
What are good books for learning grammar ( BNF )?
6
Are there any books containing collections of automata problems?

6
Books on Mu-Calculus
268
What Books Should Everyone Read?
10
Why are linear bounded automata not as popular as other automata?
40
How practical is Automata Theory?
257
What is the enlightenment I'm supposed to attain after studying finite automata?
13
Book for self study of algorithms in group theory
17
A reference for a "more algebraic" approach to pushdown automata and CFLs?
6
Reference Request: Computational Learning Theory