Is the sub-bit model of quantum computation equivalent to other models? [closed]

Ask Question
Asked 8 years ago
Active 8 years ago
Viewed 209 times
-6
$\begingroup$
Closed. This question is off-topic. It is not currently accepting answers.

Want to improve this question? Update the question so it's on-topic for Theoretical Computer Science Stack Exchange.

In a comment to this question Peter Shor asked me for a reference about the third described in the question point of view, namely, that quantum computers can be described as computers that can manipulate units of information less than one bit independently. Although I cannot provide a reference, here is a brief clarification.

Suppose that each bit is divided into N sub-bits. Each sub-bit can be in two states: 0 or 1, similarly to the bit as a whole. 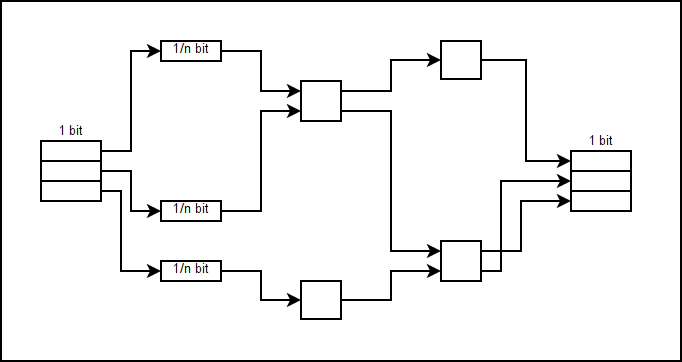 As such, the digital quantum computer can be represented as a set of classical logical gates applied to sub-bits, very much similar to a classical computer with only one diffrernce: the final result cannot be read by each sub-bit separately, but only whole bits at minimum.

Thus my question is, whether the outlined model can be considered an exhaustive description of a digital quantum computer that uses a finite set of pure states to perform its operation?

Whether the presented model can represent any quantum gate quantum computer in a limit of infinite division?

Whether this somehow indicates that a qubit actually is the same unit of information as a classical bit, albeit treated somewhat differently?

This update clarifies some of the issues pointed by Niel de Beaudrap.

Quantum gates in sub-bit model can be represented by truth table.

I'm not sure who would suggest that qubits can meaningfully be described this way, or why anyone would do so. There are simply too many missing details, and it falls afoul of no-go theorems for local hidden-variable theories in quantum mechanics. This isn't "an exhaustive description of a digital quantum computer that uses a finite set of pure states to perform its operation" — even for single qubits — and extensions to multiple qubits immediately presents problems.

It seems to me that the idea of trying to represent qubits in terms of "sub-bits" is an attempt to represent the randomness of single-qubit measurement by a hidden-variable model. Indeed, it doesn't seem capable of anything more than this; and unfortunately it doesn't even do that particularly well — it just doesn't provide any insight into quantum computation. And any similar model will succumb to the fact that no local hidden-variable theory can represent quantum mechanics.

7
Is there a standard definition of Quantum Randomness?
19
Does cryptography have an inherent thermodynamic cost?
20
Bounded depth probability distributions
16
Oracular separations between poly- and log-depth quantum circuits
3
Complexity class for quantum computer with commutative gates
3
Understanding efficient classical simulation of quantum computing
9
Is it conceivable at all that the standard model of physics can outperform a quantum computer in any sense?
7
States and Probability distributions that the 5-qubits IBM computer can produce
4
Numerical accuracy of superpositions in quantum computers
7
Quantum Money where not even the Bank can counterfeit