My initial problem is geometric, but I've reformulated it to a graph: 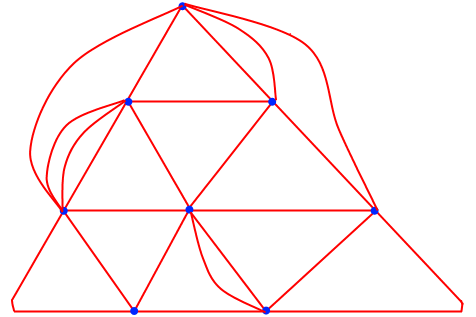 Every vertex is connected to at least two other vertices, i.e. there are no "hanging" vertices. The possible graphs are planar and bridgeless. However, in general the graph may contain multiple connected components (if this is a serious restriction - ignore it). The graph can be considered as both weighted and unweighted, but I think it's better to consider it as unweighted if the goal is to find the cycle basis of minimal closed regions. The graphs in question either have one planar embedding or multiple "equivalent" planar embeddings (e.g. consider the example graph: the parallel edges can be moved, but the simple closed loops will remain the same).

There is some ambiguity possible because of the parallel edges between some pairs of vertices. These multiple solutions are OK if they are equally valid.

P.S.: See also this question https://stackoverflow.com/questions/13111236/how-to-detect-minimal-cycles-in-a-graph - it contains mine problem formulation, but no real solution. It would really be nice to give more hints than google. And https://stackoverflow.com/questions/16782898/algorithm-for-finding-minimal-cycles-in-a-graph contains some suggestions but without any serious justification.

P.P.S.: Crossposting on CS.SE was removed (the question was deleted), but this question can still be moved to CS.SE if it's better fits there. Sorry for this misunderstanding.

graph-theory graph-algorithms
Share
Improve this question
edited May 23, 2017 at 12:40

The solution is here, I hope that it helps somebody.. The link given also in the question itself contains a useful pdf from geometrictools.com

Sorry, the question was really not that hard, but it is somehow quite popular and there's still a lot of confusion about "all faces of a planar embedding of a graph"

5
For a Planar Graph, Find the Algorithm that Constructs A Cycle Basis, with each Edge Shared by At Most 2 Cycles
14
Hitting odd cycles
20
Partition a graph into node-disjoint cycles
1
Cycle cover for structured graph
5
Is counting simple cycles in $P$ for graphs of bounded tree width?