Number of “3-edge” triangles in a planar triangulation

I'm working on a triangle partitioning problem, and I'm trying to find and prove some properties of specific triangulations. The triangulations I'm dealing with are constrained delaunay triangulations in which every constraint is at least an edge (there are no single vertex constraints). Here is an example of such a triangulation: 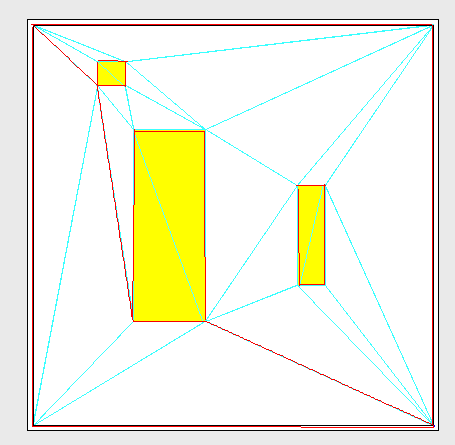 Now let us create a graph from this triangulation. Every triangle is a vertex, and edges are defined by $(v_1,v_2)$ where $v_1$ and $v_2$ are triangles that share an unconstrained edge. Notice that every vertex in this graph has degree at most 3.

My problem is that I want to say something about the number of 3 degree vertices in such a graph. I believe that at least half the vertices have less than degree 3 (just from a hunch) but I have no idea how to go about proving such a thing. What I'm asking is, what is the upper bound of the ratio degree 3 vertices to total vertices in a triangulation with these properties.

I think only those vertices corresponding to triangles sharing an edge with boundary or holes of the polygon will be of degree less than 3. Now the number of triangles in the triangulation is fixed. So you can always get the exact ratio of the number of degree 3 vertices for a polygon.

If the polygon has $k$ vertices and $l$ holes vertices and the number of triangles in the total triangulation is $N$ then the upper bound should be $(N-K-l)/N$.

Not the answer you're looking for? Browse other questions tagged graph-theory graph-algorithms delaunay-triangulation or ask your own question.