I am thinking about a variant of 3-dimensional matching. In normal 3d matching, we have three sets of vertices $X$, $Y$ and $Z$, and a set of edges $E \subseteq X \times Y \times Z$. We want to choose a matching $M \subseteq E$ of maximum size.

I was wondering whether this problem is still hard. The Garey & Johnson proof of NP-hardness of 3d matching seems to break down; if $M$ is chosen as specified above, the gadget for the variable doesn't work anymore.

I posted a small report with a more detailed proof on my blog; the reduction idea is the same, but the "gadget" used are better explained (you can also directly download the pdf from here)

The problem seems NP-complete and this is a possible reduction from SET COVER.

The reduction to your problem (I call it 3DM-relaxed, 3DMR) can be done in the following way.

Note that all $dum$ elements are distinct!

For example adding the triples:

The resulting 3DMR instance has a solution if and only if there is an set cover $\mathcal{C}$ of $A$ of size at most $k$. 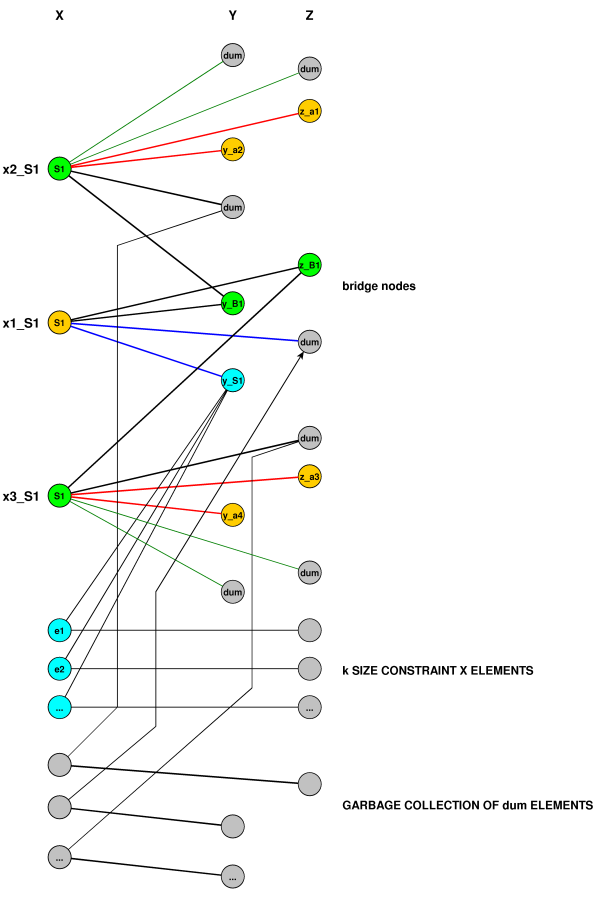 Not the answer you're looking for? Browse other questions tagged graph-algorithms np-hardness hypergraphs or ask your own question.

15
What is the following variation on Set Cover known as?
3
Subset of a bipartite graph with maximal number of minimal unmatched vertices
0
Hardness of an extended maximum set packing problem
2
Is finding whether k different perfect matchings exist in a bipartite graph co-NP?
2
Maximum stable matching/allocation
3
Min cost set of edges to connect 2 subgraphs s.t dist of nodes between subgraphs <= K
5
Minimising the root-set of a spanning hyperforest of a hypergraph
3
3-dimensional matching variant
2
Can this special case of Node Weighted Steiner Tree be solved in polynomial time?