Now, we want to minimize the cost of the schedule:

I cannot seem to find any papers on this specific problem. Does anyone know whether this has been investigated? It seems it has to be... :)

The problem: find a schedule S that minimizes the total cost over the nodes.

After a failed polynomial-time quick attempt, here it is an idea to prove that it is NP-complete using a reduction from 3SAT.

Given a 3SAT formula with $x_1,...,x_n$ variables and $C_1,...,C_m$ clauses, first build a variable assignment gadget like in the figure below (thanks to @Jukka for the clarifications, the graph drawing style, and the hint for the gadget with two configurations and same cost!). 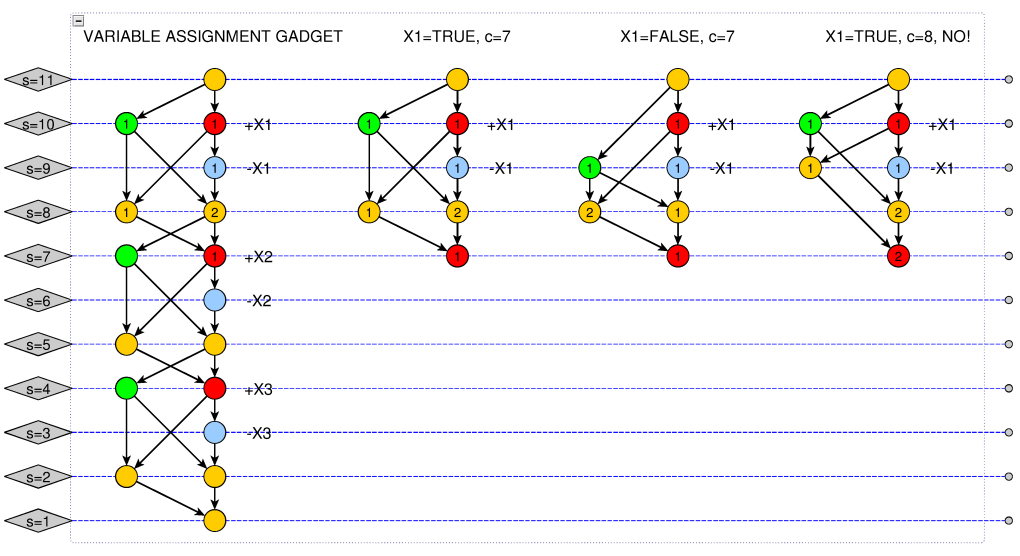 Each blue horizontal line corresponds to a different schedule time ($s=1,2,...$). On the left of the picture there is a complete assignment gadget for three variable ($x1,x2,x3$). The red nodes correspond to a $true$ assignment ($+x_i$), the blue nodes to a $false$ assignment ($-x_i$). A green node correspond to a variable $x_i$ and can be placed on the same schedule time of the red or the blue node, without afftecting the total cost of the gadget. The three possible combinations for $x_1$ are showed on the right. The number in the nodes represents the cost (the number of distinct parents). Both $x_1 = true, x_1 = false$ have a cost of 7 ($c=7$). Note that the last combination has a greater cost so it cannot be used.

Now we extend the assignment gadget to "simulate" the clauses of the formula. 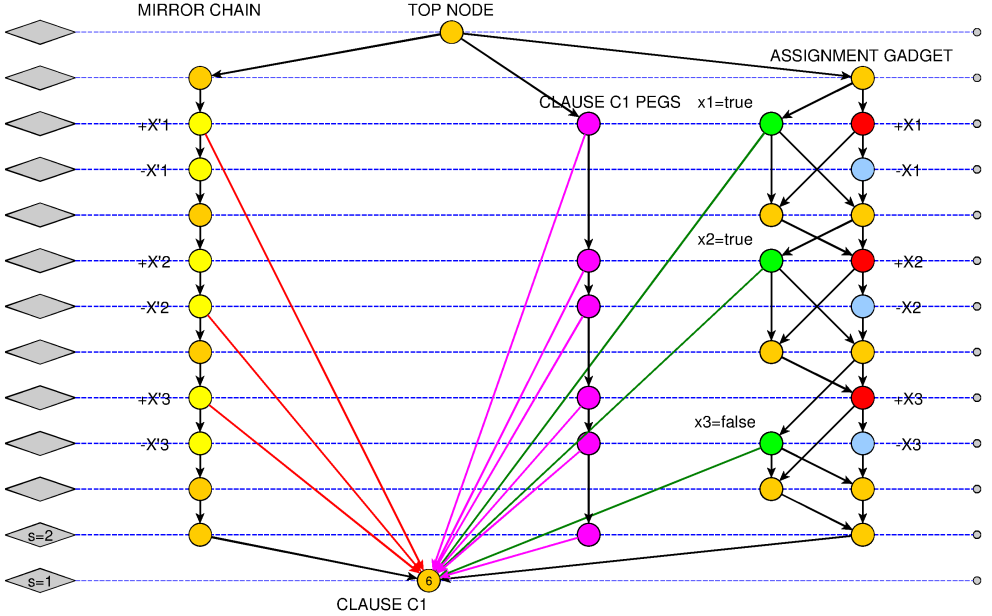 The clause pegs of $C_j$ are linked together so they must be placed at different schedule times. So the cost of $C_j$ is greater than or equal to $6$. We can keep the cost of $C_j$ equal to 6 if and only if the assignment corresponding to the position of the green variables nodes contained in $C_j$ satisfies $C_j$.

First of all note that the bottom peg $P_{j,1}$ must be put at schedule time $s=2$ because $C_j$ is linked to the bottom of the assignment gadget and mirror chain. So only 5 of the pegs are "free" to be assigned to greater schedule times (otherwise the cost of $C_j$ is \geq 7$).

But what happens if we cannot find an assignment that satisfy all clauses? Then, in at least one clause (suppose $C_1$), the green variable nodes $x_1=false,x_2=true,x_3=false$ are all on a different schedule time of the corresponding $+x'_1, -x'_2, +x'_3$. So the 5 free pegs are not enough to "mask" them and the number of distinct parents of $C_1$ increases to $7$, like in the figure below. 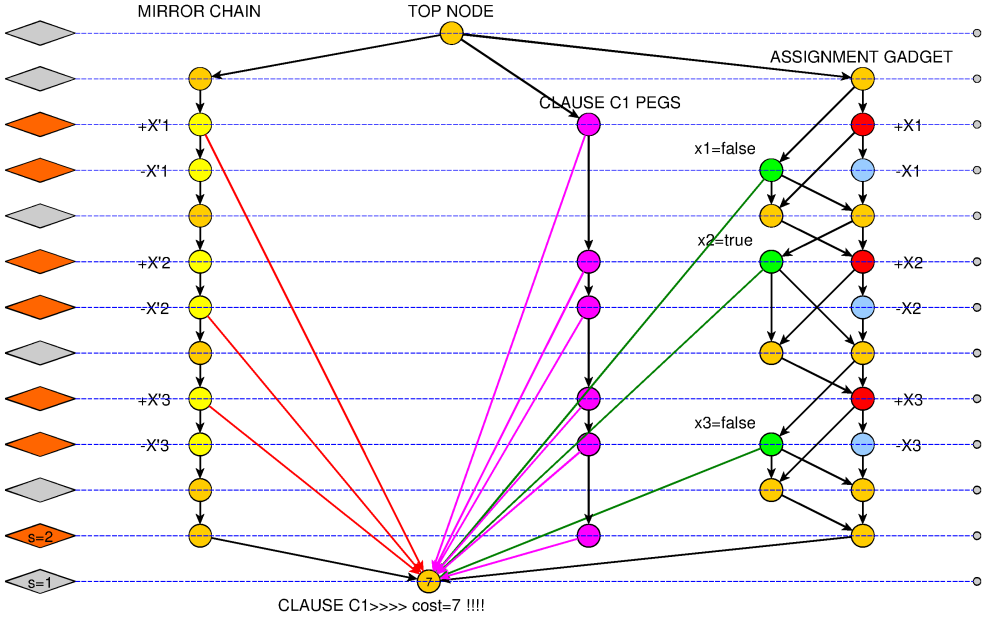 Note that without the pegs, the (minimum) total cost $c_t$ of the schedule is fixed, so we can conclude that after adding the pegs, the original formula is satisfiable if and only if the total cost of the graph is less than $c_t + 6*m$.

This is a non-answer, but it might help to understand the question (assuming that I understood it correctly).

Here is a simple but slightly non-trivial example:

I would not be surprised if this was NP-hard. There seem to be opportunities for designing all kinds of gadgets. For example, here is a gadget in which we have two optimal solutions—one of the sink nodes has to pay 2 units, but you can choose which one.

I found a reduction from the Partition Problem to a modified version of the proposed problem.

This problem is NP-hard.

The reduction from the partition problem to the level assignment problem can be done as follows: for each $s_i \in S$, create the following gadget, where the weights are indicated between brackets: 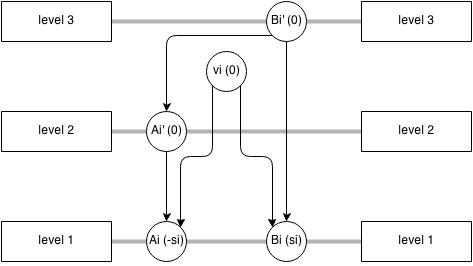 It is easy to see that the following mappings are obligatory:

Now, after solving the level assignment problem, group the $s_i$ in the following way:

This is the function that is minimized and it corresponds to the minimization problem of the partition problem. Hence, our problem must be NP-hard as well.

Note: the partition problem has an absolute value in the function to be minimized. This is no problem, as this can be accomplished by swapping $S_1$ and $S_2$.

Not the answer you're looking for? Browse other questions tagged optimization dc.distributed-comp scheduling or ask your own question.