Minimum bandwidth problem is to a find an ordering of graph nodes on integer line that minimizes the largest distance between any two adjacent nodes. A $k$-caterpillar is a tree formed from main path by growing edge-disjoint paths of length at most $k$ from its nodes ($k$ is called the hair length). Minimum Bandwidth problem is in $P$ for 2-caterpillars but it is $NP$-complete for 3-caterpillars.

Here is a very interesting fact, Minimum bandwidth problem is solvable in polynomial time for 1-caterpillars (hair length at most one) but it is $NP$-complete for cyclic 1-caterpillars (in cyclic caterpillar, one edge is added to connect the endpoints of the main path). So, the addition of exactly one edge makes the problem $NP$-complete.

What is the most striking example of problem hardness jump where a small variation of input instance causes a complexity jump from polynomial-time solvability to $NP$-completeness?

One of the more interesting applied examples of hardness jumps can be observed in the following problem:

The result can be generalized for any $(0, 1, k)$-point rule for every $k > 2$ and even for only three remaining rounds.

A shocking example of jump-in-hardness arises from the question, "How many satisfying assignments does a planar formula have, modulo $n$?" This was widely thought to be #P-hard, and it is for "most" values of $n$, but if $n$ is a Mersenne integer (for example $n=7$, because 7 is of form $2^3-1$), then the answer can be computed in polynomial time.

This was first discovered by Valiant, in his groundbreaking Holographic Algorithms paper.

Notice that the cross is obtained from the chair by adding a single edge.

I am not sure I would go along with your characterization that adding a single edge to the input makes the problem NP-complete, since one is actually allowing an edge to be added to every one of the infinitely many input instances.

Here is an example of a problem which shows a sharp dichotomy along the lines you suggest.

The problem of determining whether there is a graph homomorphism from the input graph G to a fixed template graph H is in P when H is a graph with a self-loop or is a bipartite loopless graph. When H is not bipartite (this can often be achieved by adding a single edge) then the problem becomes NP-complete.

It is easy to describe in figures: 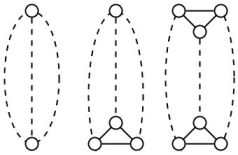 For detecting induced theta and pyramid, it is known to be in polynomial time. (In fact, the best known algorithm for theta takes $O(n^{11})$ time, and for pyramid it takes $O(n^9)$.) But for detecting an induced prism, the problem becomes NP-hard.

One can see "Detecting induced subgraphs" by Leveque, Lin, Maffray and Trotignon for reference. The reason that theta and pyramid are relatively easy is related to the "three-in-a-tree" problem, described in "The three-in-a-tree problem" by Chudnovsky and Seymour.

We can consider a parameterized family of distributions, and then talk about what happens when we change the parameter. You might be interested in what is called the threshold phenomenon, "where a system undergoes a swift qualitative change as a result of a small change in a parameter ...". Take a look at this survey: Ehud Friedgut, "Hunting for Sharp Thresholds", Random Structures Algorithms 26, 2005.

I think one of the most striking and beautiful examples is the random k-SAT with clause density $\Delta$, the phase transition is really amazing.

Inferring types for lambda terms is DEXPTIME-complete with prenex and rank-2 polymorphic type systems (when type quantifiers are nested at most one level deep), but becomes undecidable for rank-3 and higher. Strange that one extra nesting level can render a problem undecidable.

Here is a nice problem with an interesting complexity jump like Minimum Bandwidth you addressed in your question.

For every fixed $k$ and $d$ the problem is solvable in linear time for graphs of degree at most $d$. In contrast, if we allow only one vertex of unbounded degree, the problem immediately becomes $\mathsf{NP}$-complete for any fixed $k\ge 8$.

I wonder why nobody mentioned this:

I guess everybody knows what it is. If not:

Horn-Sat is to find if a set of horn clauses is satisfiable (each clause has at most 1 positive literal).

K-Sat is to find if a set of clauses is satisfiable (each clause can have more than 1 positive literals).

So allowing more than one positive literal in each clause makes the problem from P-complete NP-complete.

As mentioned in another answer, 2-COL is solvable in polynomial time while 3-COL is NP-complete. But when increasing the number of colors, after some (unknown?) point the problem gets easier!

For example, if we have N vertices and N colors, the problem can be solved by assigning a different color to each vertex.

In a similar vein: Permanent vs Determinant.

I just read a paper that deals with hypergraph partitioning. The Problem is defined as this, quote:

In general, it is proven that:

If this is not "jump" enough, read on. For hypergraphs with disjoint hyperedges, it is shown:

In the job shop problem we have a set of $n$ jobs that must be processed on a given set $M$ of $m$ machines. Each job $j$ consists of a chain of $\mu_j$ operations $O_{1j},O_{2j},\dots,O_{\mu_jj}$. Operation $O_{ij}$ must be processed during $p_{ij}$ time units without interruption on machine $m_{ij}\in M$. A feasible schedule is one in which operation is scheduled only after all its preceding operations have been completed, and each machine processes at most one operation at a time. For any given schedule, let $C_j$ be the completioon time of the last operation of job $j$. Taken here.

There are such objectives as minimizing the makespan $C_{max}=max_jC_j$ and total completion time $\sum C_j$. Regular criteria are defined here.

In the notation of Graham et al. this problem is denoted as $J||\gamma$, where $\gamma$ denotes the objective function to be minimized.

Thus, here we can see that there is a jump when we go from two jobs/machines to three.

Not the answer you're looking for? Browse other questions tagged cc.complexity-theory or ask your own question.