Having an alphabet made of 1024 symbols, we know that the rarest symbol has a probability of occurrence equal to 10^(-6). Now we want to code all the symbols with Huffman Coding. How many bits will the longest encoded symbol have? How many encoded symbols will have same length?

I try to imagine a Huffman tree for it, but it does not appear to make much sense, as trees for Huffman encoding aren't always balanced (so I can't use tree's height to calculate this I guess). I know that at least two least-probable symbols will have longest codings, but how to relate element's probability with its Huffman code length? Or maybe there is some other way to calculate it?

One can see this by constructing a Huffman tree with a probability distribution with probabilities proportional to the Fibonacci numbers $$\{1,1,1,2,3,5,8,13, \ldots, F_n\}.$$ (The third 1 is deliberate.) When combining these into a Huffman tree, you are faced with lots of choices. One set of choices yields a tree of depth approximately $n$; another, approximately $n/2$. 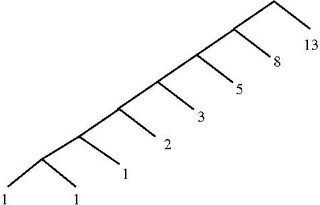 and the small-depth Huffman tree where the longest codeword has length 4:

Both of these trees have $43/17$ for the expected length of a codeword, which is optimal.

Not the answer you're looking for? Browse other questions tagged pr.probability encoding or ask your own question.

4
Why does the Fibonacci sequence produce a worst-case Huffman encoding?
34
Book on Probability
13
Why does Huffman coding eliminate entropy that Lempel-Ziv doesn't?
9
High probability events without low probability coordinates
1
question about probability ranking principle
9
$k$-wise independent probability spaces
2
How many different Huffman encoding for a given number of symbols
1
Inequality for p-norm of probability distributions