What is the minimum size of a circuit that computes PARITY?

It is a classic result that every fan-in 2 AND-OR-NOT circuit that computes PARITY from the input variables has size at least $3(n-1)$ and this is sharp. (We define size as the number of AND and OR gates.) The proof is by gate-elimination and it seems to fail if we allow arbitrary fan-in. What is known for this case?

Specifically, does anyone know an example when larger fan-in helps, i.e., we need less than $3(n-1)$ gates?

It is possible to compute parity using only 2.33n + C gates. The construction is quite simple and is given in this article. 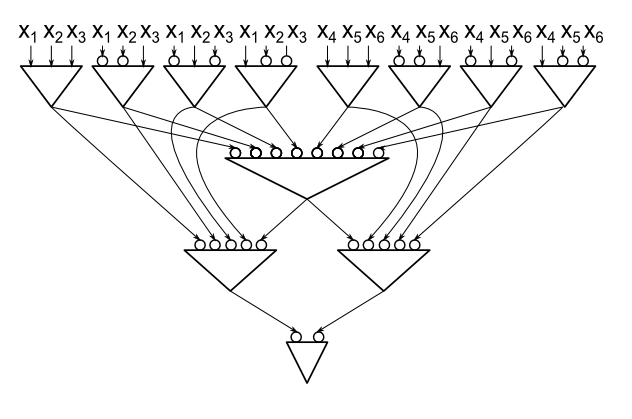 This gate-elimination lower bound does not match Marzio’s upper bound, but it’s a start.

Proposition: Every unbounded fan-in AND/OR/NOT circuit computing parity on $n\ge2$ variables contains at least $2n-1$ AND and OR gates.

For convenience, I will use a model where the only gates are AND-gates, but we allow negation wires. It is easy to see that $3$ gates are necessary for $n=2$, hence it is enough to show that if $C$ is a minimal-size circuit computing parity on $n>2$ variables, we can find a restriction of one variable which kills at least two gates.

EDIT: As I learned from Yuri Kombarov’s paper, this $2n-1$ lower bound, as well as the $\lfloor\frac52n\rfloor-2$ upper bound implied by Marzio De Biasi’s answer, were originally proved in

2) if you allow arbitrary fan in then you can beat the $3(n-1)$ bound; for example consider the PARITY on 3 variables $(x_1,x_2,x_3)$; the following circuit computes it with only 5 arbitrary fan-in gates: 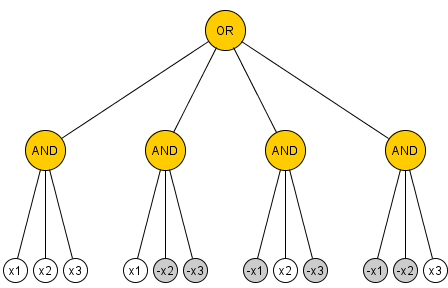 This is an extended comment to show what Emil's argument gives if we try proving the $5n/2$ bound. Here we can try to eliminate 3 gates with one variable or 5 gates with two variables.

If there is a literal with 3 parents, we can eliminate all 3 with one variable.

If two literals occur together in 2 different gates, together, we can apply the main argument from Emil's answer, again eliminating 3 gates with one variable.

Not the answer you're looking for? Browse other questions tagged cc.complexity-theory circuit-complexity parity or ask your own question.

19
Most efficient way to convert an $\text{AC}^0$ circuit to a circuit (of any depth) with gate fanout 1
4
Probabilistic circuit complexity or size of probabilistic 2-way automata for Boolean functions
5
Monotonicity and Threshold function
7
What complexity issues are there in considering quantum algorithms with infinite gate-sets?
21
Arithmetic circuits with just one threshold gate
14
Universal Boolean Formulas