Hiroimono is a popular $NP$-complete puzzle. I'm interested in the computational complexity of a related puzzle.

Input: Given a set of points on on a $n$x$n$ square grid and integer $k$

Question: Is there a rectilinear polygon (its sides parallel to the $x$ or $y$-axis) such that the number of points on the polygon's corners is at least $k$?

Every corner of the polygon must be at one of the input points (so bends are only allowed at an input point).

EDIT April 13: Alternate formulation: Find a rectilinear polygon with the maximum corners on the given points.

I thought of this weird reduction (chances that it is wrong are high :-). Idea: reduction from Hamiltonian path on grid graphs with degree $\leq 3$; each node of the planar graph can be shifted in such a way that every "row" ($y$ value) and every "column" ($x$ value) contains at most one node. The graph can be scaled and each node can be replaced by a square gadget with many points; horizontal links between the gadgets (the edges of the original graph) are made using pairs of points on distinct rows, vertical links using pair of points on distinct columns. Node traversals are forced using the "many points" of the square gadgets.

The node gadget is represented in the following figure: 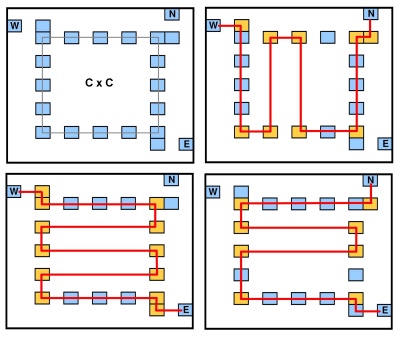 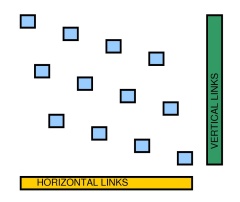 Now we can simulate the edges of the original graph using pairs of points on the bottom or on the right, each pair on a separate row or on a separate column; see the following figure for two adjacent nodes linked horizontally (in a new bottom row two points are added one on the same column of interface point $E$ of the first gadget, the other on the same column of interface point $W$ of the second gadget). 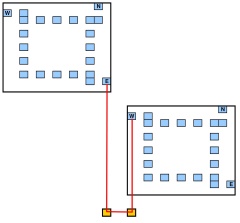 Suppose that the original graph has $n$ nodes and $e$ edges, if we pick $C > (4n+2e)$, and $k = 2Cn$ as the number of corner points that must be used, then we force the "hidden" polygon of the puzzle to traverse every gadget; but every gadget can be entered/exited exactly once (through a pair of interface cells); so the problem has a solution if and only if the original grid graph has an Hamiltonian path.

Not an answer, just a few references. First, I wrote a paper (long ago!) on the case where every point in the given set $V$ must be a polygon corner. In that case, it is not surprising that there is (at most) one polygon, and it is easy to find: "Uniqueness of Orthogonal Connect-the-Dots," in Computational Morphology, Ed. G. T. Toussaint, Elsevier, North-Holland, 1988, 97-104.

Second, there is a beautiful update to this work by Maarten Löffler and Elena Mumford, in a paper, "Connected Rectilinear Graphs on Point Sets," Journal of Computational Geometry, 2(1), 1–15, 2011. From their Abstract:

We study the question whether there exists an orientation such that $V$ is the vertex set of a connected rectilinear graph in that orientation. ... We prove that at most one such orientation can be possible, up to trivial rotations of 90 degrees around some axis.