Again an edge-partitioning problem whose complexity I'm curious about, motivated by a previous question of mine.

I think I saw a paper one day where this problem was proven to be NP-complete, but I cannot find it anymore, and I don't remember whether that result applied to cubic graphs. On a related matter, I'm aware that edge-partitioning a bipartite graph into claws is NP-complete (see Dyer and Frieze). Does anyone have a reference for the problem I describe, or something related (i.e. the same problem on another graph class, that I could then try to reduce to cubic graphs)?

This isn't an answer to the complexity of the problem, but it at least shows that the complexity has a chance at being nontrivial: it's an example of a cubic graph that cannot be partitioned into paths and claws. 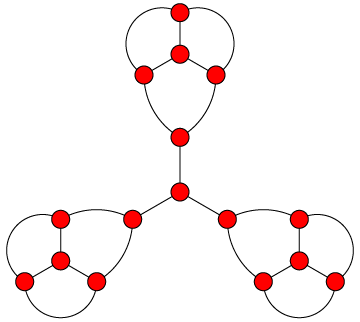 The proof is very simple: if M is a perfect matching in a cubic graph, the removal of M leaves a 2-regular graph, that is, a disjoint union of cycles. Orient each cycle arbitrarily, and attach each edge uv of M to the cycle edges that follow u and v in the orientations of their cycles.

(Disclaimer: this idea may have already been present in Carsten Thomassen's invited talk at GD 2010, which was about this sort of graph decomposition problem.)

(addition to disclaimer (by Anthony Labarre): the "orientation idea" for going from a perfect matching to a partition into paths appears in this paper by Jünger, Reinelt and Pulleyblank, who attribute it to W. H. Cunningham.)

It seems I had missed this other paper by Dyer and Frieze, where they prove that partitioning the edges of a planar bipartite graph into connected components with $k$ edges is NP-complete for any fixed $k\geq 3$ (Theorem 3.1 p. 145). They then comment that the problem can be shown to remain NP-complete for $k=3$ if all vertices have degree $2$ or $3$, which unless I parsed this the wrong way includes my problem (since the input is bipartite, the graph contains no odd cycle and in particular no triangle, which means that the only subgraphs we can use are claws and paths).

This wasn't actually the end of the story: if the cubic graph is bipartite, then it's easy to partition its edge set using only claws, by selecting one set of the bipartition and making it a set of "claw centers". The general problem is indeed hard, which can be proved using a reduction from CUBIC PLANAR MONOTONE 1-IN-3 SATISFIABILITY. All details are freely accessible on arxiv.

Perhaps this paper may be of interest:

It deals with graphs which can be written as the union of "Z-paths" of length 3. (Specifically, planar, 3-valent, 3-connected graphs-cubic 3-polytopes.)

Not the answer you're looking for? Browse other questions tagged cc.complexity-theory graph-theory np-hardness co.combinatorics or ask your own question.

25
An edge partitioning problem on cubic graphs
5
Is it $NP$-complete to decompose bridgeless cubic bipartite graph into edge-disjoint paths of length 3?

25
An edge partitioning problem on cubic graphs
1
Another edge partitioning problem on cubic graphs
8
Is there a P/NP-complete dichotomy theorem for natural interesting properties of cubic graphs?
5
Is it $NP$-complete to decompose bridgeless cubic bipartite graph into edge-disjoint paths of length 3?
3
Has this form of "kind-of-dual" homomorphisms been studied?
11
Parameterized complexity of inclusion of regular languages
3
Mutually exclusive replacement paths, an existing problem?