Several papers appear to imply P=NP via chordal graphs, what is wrong?

Several papers appear to imply P=NP via chordal graphs, which suggests something is wrong.

According to VIZING’S CONJECTURE FOR CHORDAL GRAPHS, p.1

The equality in Theorem 1.1 appears to imply P=NP since we can compute $\gamma(G)=i(G)$ in chordal graphs by the above result.

What is wrong with this?

The problem is that you confused the definiton in the paper of Aharoni & Szabo and the normally used definition for the term "independence domination number". The former one refers to the largest size over all minimum set dominating an independent set, and the latter one is the smallest size of a dominating set which is also an independent set.

These two definitions are quite different, and as you noticed they have different symbols: $\gamma^i(G)$ and $i(G)$. The Theorem 1.1 you mentioned actually claims $\gamma(G)=\gamma^i(G)$ for chordal graphs $G$, and generally they are not equal to $i(G)$ even when $G$ is chordal. The following graph is a counterexample: 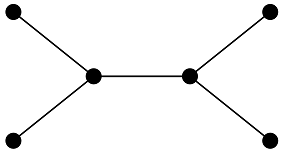 As a comment, Allan & Laskar showed that $\gamma(G)=i(G)$ when $G$ is claw-free, but there are no such conclusions for chordal graphs.

Not the answer you're looking for? Browse other questions tagged cc.complexity-theory graph-theory or ask your own question.

16
Reference for (odd-hole,antihole)-free graphs?
7
Using MSOL for solving BIDS problem
7
Is it known whether hypergraph minimal covers are P-enumerable?
23
Problems that are easy on unweighted graphs, but hard for weighted graphs
11
Polynomial problems in graph classes defined by forbidden induced cyclic subgraphs
7
The Overfull conjecture in graph theory and $coNP$
4
Weird claim of graphclasses about complexity of domination
1
Two paper appear to imply collapse via coloring $P_5$-free graphs