In order to analyse the complexity of our algorithm, we try to solve this recurrence:

The term $3^k$ expects a small value of $k$, while the rest terms want a big value of $k$, therefore we believe that there should be a best choice of $k$.

Thank you in advance for any idea.

To somewhat simply the problem, we may consider $g(n)=\beta n$ and try to find the $\beta$ ?

Just to make the discussion more complete, I'd like to add another approach to solve this problem. Please do not hesitate to give your comments/corrections!

I've just found in the literature some standard ways to solve Non-homogeneous Recurrence, which is exactly our case if we don't consider the parameter $k$.

1. Solve the Associated Homogeneous Recurrence (which can be gotten by replace $f(n)$ with 0) in general form

2. Find a particular solution of the non-homogeneous recurrence

We can guess the form of solution according to the form of $f(n)$, e.x. if $f(x)=c^n$, then we know the form of the particular solution is $a^*_n=Bc^n$. Then we plug it into the original recurrence to get the value of $B$.

More general forms for common $f(x)$ (extracted from the book referenced at last): 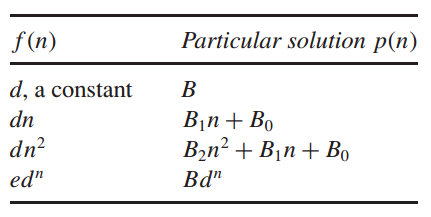 3. Just add up the two solutions

4. Finally, use initial values to determine A.

Application to our problem

Since we only want an asymptotic complexity, the steps followed are much simplified: we know directly that $$ \alpha=max(\phi^2, \alpha^{1-\beta}, 3^\beta)$$

I hope that the idea is clear, please help me to make it more formal. I refer readers to the book Applied-Combinatorics-Alan-Tucker.More references can be found by searching "solve linear non-homogeneous recurrence".

Not the answer you're looking for? Browse other questions tagged analysis-of-algorithms complexity or ask your own question.