Chaos and the $P{=}NP$ question

I am interested in learning connections between "chaos," or more broadly, dynamical systems, and the $P{=}NP$ question. Here is an example of the type of literature I am seeking:

Has anyone written a survey, or made a bibliographic compendium?

the paper you cite by Ercsey-Ravasz, Toroczkai is very crosscutting; it fits in with/ touches on several lines of NP complete problem/ complexity/ hardness research. the connection to statistical physics and spin glasses was uncovered mainly via "phase transitions" in the mid 1990s and that has led to a large body of work, see Gogioso[1] for a 56p survey. the phase transition coincides with what is known as "the constrainedness knife edge" in [2]. the exact same transition point does turn up in very theoretical analyses of computational complexity/ hardness eg [3] that also relate to early studies of transition point behavior in clique problems by Erdos. [4] is a survey/ video lecture on phase transitions and computational complexity by Moshe Vardi. [5][6] are overviews of phase transition behavior across NP complete problems by Moore, Walsh.

then there is scattered but maybe increasing study of the diverse connections of dynamical systems with computational complexity and hardness in a variety of contexts. there is a general connection found in [7] possibly explaining some of the underlying reasons for frequent "overlap". refs [8][9][10][11] are diverse but show a reoccuring theme/ crosscutting appearance between NP complete problems and various dynamical systems. in these papers there is some concept/ examples of a hybrid link between discrete and continuous systems.

chaotic behavior in NP complete systems is analyzed in [11].

In this paper we study a new approach to quantum algorithm which is a combination of the ordinary quantum algorithm with a chaotic dynamical system. We consider the satisfiability problem as an example of NP-complete problems and argue that the problem, in principle, can be solved in polynomial time by using our new quantum algorithm.

[3] The Monotone Complexity of k-Clique on Random Graphs / Rossman

[11] On chaotic behaviour of some np-complete problems / Perl

There is a relatively recent research trend (15 years or so) of mixing statistical physics of disordered systems and discrete, combinatoric, optimization problems. The link is through the Boltzmann probabilities, and the computational hardness is related to the multiplication of metastable states of the physical system. Spin glasses models are provable isomorphic to most discrete optimization problems.

I advice you to start with this PhD thesis, there you'll find more references

One classical paper, which, to be sincere I don´t understand that well is:

Also, on spin glasses, an introduction

Unfortunately it's behind a paywall so I'm unable to view that paper but from reading the abstract it bears at least a superficial similarity to some "cartoon pictures" that I've seen on survey propagation and it's use to solve 3-SAT. Here is a "cartoon picture" from Maneva, Mossel and Wainwright's "A New Look at Survey Propagation and Its Generalizations" 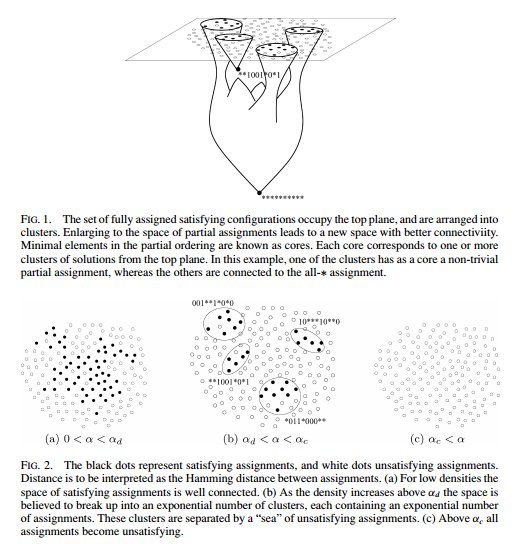 Here $\alpha_d$ is the value for the density transition and $\alpha_c$ is the critical threshold value ($\approx 4.2$ for 3-SAT).

It'd be interesting to see if the locations of the different fractal regions reported by Ercsey-Ravasz and Toroczkai correspond to the different critical thresholds noticed in survey propagation (or if I'm completely wrong and the similarity really is superficial).

This paper, Polynomial-time solution of prime factorization and NP-complete problems with digital memcomputing machines, claims an efficient algorithm for NP-complete problems. Digital memcomputing machines are non-linear dynamical systems designed such that their equilibrium points correspond to the solutions of a Boolean satisfaction problem. The most important implication is that a dynamical system that efficiently solves NP-complete problems can exist. They conclude that their result does yet solve the P vs NP problem. P=NP would follow from formally proving that if equilibria exist, the global attractor does not support periodic orbits and/or strange attractors.

Not the answer you're looking for? Browse other questions tagged cc.complexity-theory p-vs-np or ask your own question.

8
Simple question about decision problems
7
P vs. NP and Pseudorandom Bit Generators
11
Recent publications on NP ?= coNP question
7
Application of methods from dynamical system to the study of k-SAT and similar problems
8
A question on GCT
13
Why do computer scientists on the whole work under the assumption that P ≠ NP?