$C$ is an axis-parallel rectangle. 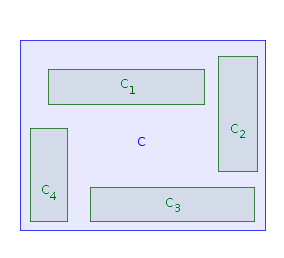 A rectangle-preserving partition of $C$ is a partition $C = E_1\cup\dots\cup E_N$, such that $N\geq n$, the $E_i$ are pairwise-interior-disjoint axis-parallel rectangles, and for every $i=1,\dots,n$: $C_i \subseteq E_i$, i.e, each existing rectangle is contained in a unique new rectangle, like this: 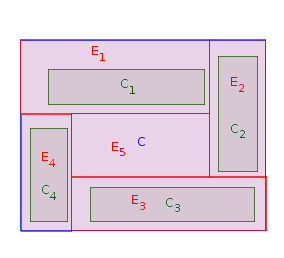 What is an algorithm for finding a rectangle-preserving partition with a small $N$?

In particular, is there an algorithm for finding a rectangle-preserving partition with $N=O(n)$ parts?

The proofs are in this paper.

The following algorithm, while not optimal, is apparently sufficient for finding a rectangle-preserving partition with $N=O(n)$ parts.

The algorithm works with a rectilinear polygon $P$, which is initialized to the rectangle $C$. 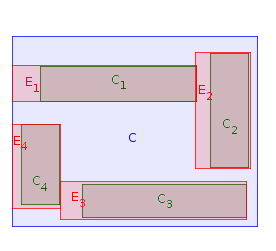 Now, $P$ is a rectilinear polygon (possibly disconnected), like this: 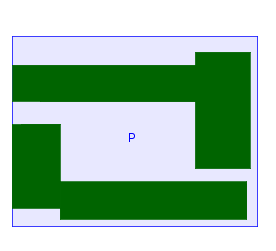 I claim that the number of concave vertices in $P$ is at most $2n$. This is because, whenever a stretched rectangle is removed from $P$, there are 3 possibilities:

This algorithm is not optimal. E.g, in the above example it gives $N=13$ while the optimal solution has $N=5$. So two questions remain:

A. Is this algorithm correct?

B. Is there a polynomial-time algorithm for finding the optimal $N$, or at least a better approximation?