Classically, it's very easy to create an incrementing function that can perform up to $n$ increments with $O(n)$ work:

Although any given increment may take $O(n)$ work individually, it must also create a situation where the following increments are cheap due to short-circuiting.

When working with qubits, the above approach doesn't work. The short-circuiting test would require a measurement, and various parts of the superposition would have to short-circuit at different times.

With that in mind, consider the following circuit. It keeps applying some unspecified and possibly varying operation to a qubit then doing a conditional increment: 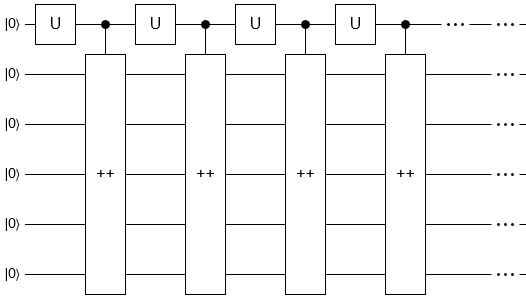 Each increment here is being done naively, so each of the $n$ increments requires $O(\lg n)$ gates and the overall circuit has $O(n \lg n)$ cost. Even though, within each component of the superposition, most of that work is wasted on most increments. Classically we would only need $O(n)$ gates total.

Is there some way to optimize the circuit down to $O(n)$ gates, without depending on the details of $U$?

My initial idea for this problem was to store all the controlled outcomes separately, then merge them pairwise until they were all in a single counter. That would be $O(n)$ aggregate work as desired. But for it to work identically to the original circuit you need to uncompute all the sub-counters used during merging, and the uncomputing doesn't seem to work when the counted values don't commute (e.g. if $U = H$).

Browse other questions tagged quantum-computing or ask your own question.

27
NP-intermediate problems with efficient quantum solutions
4
Quantum oracle for non-negative vector
7
What complexity issues are there in considering quantum algorithms with infinite gate-sets?
3
Complexity class for quantum computer with commutative gates
11
Problems with no known quantum advantage
3
When is a non-unitary quantum system only theoretical?
2
Why is it impossible to work with polylog length encoding schemes for quantum circuits?
6
Quantum polynomial hierarchy vs counting hierarchy