Is there a simple argument for this Hemi-Icosahedron Boolean function? 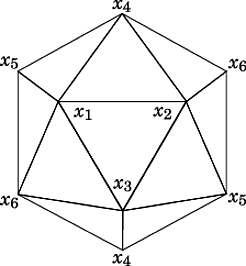 My question: Is there a quicker way to see that the solution should be the answer I got below by brute force? I get how to calculate the Fourier expansion by brute force in general, but I don't feel like I have been very successful at trying to exploit symmetries in special cases like these.

My attempt at a solution

This actually seems to work for all of the inputs I have tested. Basically it seems like there is a degree three term for each of the ten facets of the hemi-icosahedron, plus a correction term for each of the six variables for some reason. But why or how should I have predicted this result?

Browse other questions tagged boolean-functions fourier-analysis or ask your own question.

29
Fourier coefficients Boolean Functions described by Bounded Depth Circuits with AND OR and XOR gates
8
Is a monotone boolean function monotone as a multilinear polynomial?
4
Which (almost) balanced Boolean function has smallest "total" influence