Assume a planar graph G, and all its vertices have degree at most 4.
Consider a cycle in G. The weight of cycle c is the total weight of its vertices, and a vertex is weighted with the following manner:

1-What is the complexity of finding a cycle with total weight k? (k is a given value)
2-Is finding weighted cycles in G harder than finding cycles in general weighted graphs? 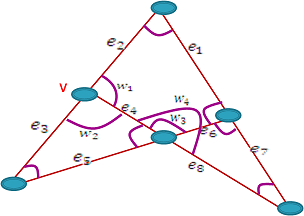 For the second problem, this question is no harder than finding a cycle of a specific weight k in a general weighted graph in the following sense: consider the line graph of G, that is, a graph L(G) with V(L(G)) = E(G), and two nodes u,v in L(G) are adjacent if the corresponding edges in G are incident to each other. By assigning weights to the edges of L(G) according to your definition, it reduces to the normal weighted cycle problem.

Thus to the first problem, in general if we do not have any constrain on k, we can assign 1/|V(G)| to each edge in an unweighted graph G, and reduced the Hamiltonian cycle problem to the weighed cycle problem by asking k=1, thus it is NP-hard. If you are asking non-negative integral weights, then the algorithm mentioned in the MO post again works since we can subdivide the edges into an unweighted graph. But be careful since the size of the subdivided graph will depends on the total weight on the original graph.

6
Complexity of counting weighted cycles in planar graphs?
1
complexity of finding a cycle with total weight k in a graph when you know no hamiltonian cycle in graph satisfies the given weight k
0
Complexity of weighted cycle in a hamiltonian graph
2
minimal cycles in undirected graph
0
Run Dijkstra's algorithm twice to detect negative-weight cycles?
6
Maximum number of geometrically disjoint paths - is the complexity known?
0
Graphs-like data structure with weighted vertices