What is the intuition behind linear logic?

I'm trying to understand linear logic to understand linear type systems better. However, when I read the rules, I fail to get an intuition behind it as I've done in modal logic - $\Box A$ means $A$ is required as in Kripke frames $A$ is required for every reachable world [$\Diamond A$ is $A$ is possible mutatis mutandis]. But I cannot find any intuitive explanation for duality and which of conjunction / disjunction pairs (if any) corresponds to $\land$ and $\lor$.

I'm not sure this question is ideal for CSTheory, but given that it's already gathering upvotes, here is an answer somebody might have given had the question been posted on cs.stackexchange.

In order to understand linear logic's notion of duality $(\cdot)^{\bot}$, which forces conjunction and disjunction apart much further than we are used to in conventional logic, I recommend not to think of linear logic in terms of resources (although this is an important reading). Instead think of linear logic formulae $A$ as processes that communicate at a port / name / channel. This interpretation has been fleshed out first in (1) to the best of my knowledge, but it's already alluded to in Girard's original work. As a picture:

(I'm not sure how properly to center images here.) Linear conjunction $A \otimes B$ is interpreted as running processes $A$ and $B$ in parallel. The process $A \otimes B$ communicates pairs $(a, b)$ at its port, where $a$ comes from $A$ and $b$ is $B$'s communication. 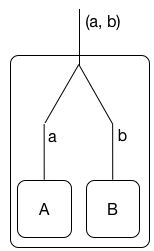 Dualisation $(.)^{\bot}$ (which is linear logic's negation) switches input and output. Hence the dual of $A \otimes B$ is

Linear logic's equivalent of disjunction can be given a similar process-theoretic reading. The formula

should also be seen as two processes $A$ and $B$ in parallel, but rather than actively sending messages, they wait for the environment to decide which to run. So $A \& B$ sits there, waiting on its channel for a bit of information which decides if $A \& B$ should run as $A$ or as $B$. This is a 'parallel' version of the $if/then/else$ in sequential programmaning languages. The dual $(A \& B)^{\bot}$ of $A \& B$ is

The !-operator also has a process-theoretic interpretation: if $A$ is read as a process, then $!A$ can be read as running infinitely many processes $A$ in parallel.

In this reading the axioms $A \vdash A$ of linear logic become simple 'wires' that forward messages from processes $A^{\bot}$ to processes $A$. This interpretation of axioms is already in Girard's proof nets (3).

This process-theoretic interpretation has been influential and given rise to a lot of follow-up work like e.g. (2) for session types. Nevertheless, there are some edge cases that make it a bit awkward, and to the best of my knowledge it hasn't been made to work perfectly for full linear logic even in 2017.

Not the answer you're looking for? Browse other questions tagged lo.logic type-theory linear-logic or ask your own question.