Use of physical environment to obtain useful results

I dare to ask a broad layman question expecting a layman simple answer. I'm no scientist in any field.

Question: Does the following concept make sense or does it exist and actually being used? > Given some initial (digital) data, it would in some cases be possible AND more efficient to cast these "outside" of the digital computer (most probably in a form of some wave), letting it be altered through specifically fitted physical environment and receiving them back as digital data in order to solve some problem/obtain useful result rather than processing those initial data digitally by the software function. Time spent on creation of this "physical filter" (most likely not solid, e.g. magnetic field) should most probably be added to the overall processing time consumption for it to make sense. Also: it would be expected not to use this method to obtain very exact answers to exact problems, but rather to draw some useful data from some complex initial data. The filter would probably not be static, but could change according to required setup. 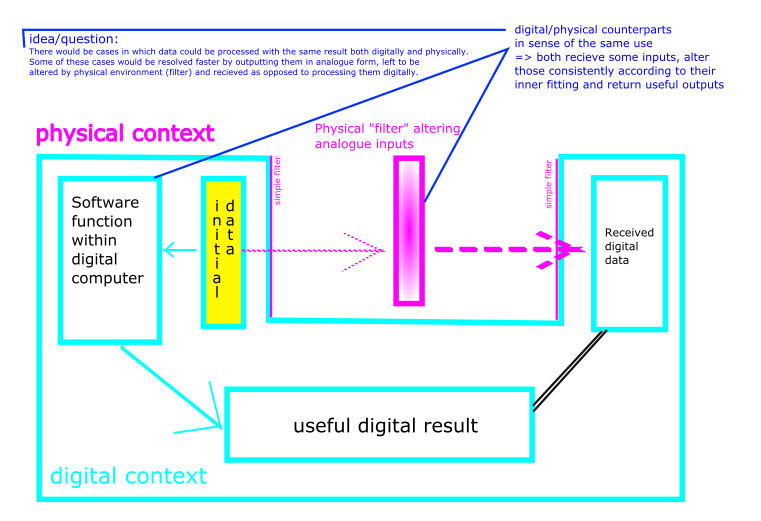 problem: Is value of x higher than any of the values in given very large set?

software solution: function iterating through each value in set and comparing value of x to it. When none is larger or equal when the cycle ends, x is higher than all, otherwise x is not larger than all and cycle can break early.

solution using physical filter: filter has the form of opaque columns of height that represent values in given set. Value of x is outputted in a form of a light ray at corresponding height "through" the filter. When no column is higher or equal, light is received by the sensor on other side.

When not considering the time required to construct such filter, the solution to the problem using the filter should be much faster than software solution, no?

Hope the question is not too stupid or too irrelevant to this stack.

Browse other questions tagged implementation or ask your own question.