If a root||nonce Proof-of-Work certificate is prime, can it be used in any other interesting proofs?

Because Bitcoin and many other cryptocurrency mining certificates are "rare" in that their respective hash is less than a very small number, can we leverage their rarity in probabilistic proofs of other interesting problems?

In more detail, in Bitcoin mining miners compete to build a block by constructing a Merkle root of financial transactions, call it root $r$, and also finding a nonce, say nonce $c$, such that a cryptographic hash $H_S(r\Vert c)$, thought of as a number between $0$ and $1$, is less than a moving difficulty target $d$. (The hash is salted with other information $S$, such as the hash of the previous block; however, most of that extra information is constant for each block mined, hence I'm sweeping that under the rug for now.) Miners find such pairs $(r,c)$ about once every ten minutes. The adjustable difficulty $d$ is presently about $2^{-72}$. Thus, miners perform roughly $2^{71}$ hashes every ten minutes or so.

For example, after a little bit of hunting on the main Bitcoin blockchain, at height 520605 Wolfram|Alpha confirms that the hexadecimal Merkle root and nonce

Furthermore, given a system $F=0$ of $k$ polynomial equations on $n$ variables, where the maximal degree over all monomials is $D$ and the bit-size of the largest coefficient is $h$, if the system is unsatisfiable in $\mathbb{C}^n$, unconditionally it will only be satisfiable modulo a finite number of prime $p$. Effective Nullstellensatz shows that for unsatisfiable systems without a solution in $\mathbb{C}^n$, there are at most

However, if a system of polynomial equations in $\mathbb{C}$ is satisfiable then it will be satisfiable in $\mathbb{Z}/{p\mathbb{Z}}$ for a positive density of primes $p$. Assuming the Generalized Riemann Hypothesis, Koiran showed these primes $p$ will be distributed "evenly" across different equivalence classes, such that there is a "large" gap in good primes between satisfiable systems and unsatisfiable systems. This gap can be verified with only looking at the behavior of "small" primes.

Accordingly, Koiran proposes a protocol of certifying the satisfiability of the system over $\mathbb{C}$ by finding a rare prime $p$ such that both there is a solution to the given system in $\mathbb{Z}/{p\mathbb{Z}}$, and $H(p)=y$ for some randomly chosen hash $H$ and randomly chosen image $y$, where the size of the codomain of $H$ is chosen carefully such that there are enough candidate preimages $p$ to be able to invert the hash $H$ iff $F=0$ is satisfiable in $\mathbb{C}$.

Finally, as an example of using Bitcoin certificates in conjunction with Koiran's result, consider Chao and Gao's description of automated proofs of interesting geometric theorems. Given a problem in plane geometry, Chao and Gao construct systems of algebraic equations for the hypotheses and conclusion, and apply the Wu-Ritt method of characteristic sets to test whether the conclusion polynomial follows from the hypothesis polynomials. 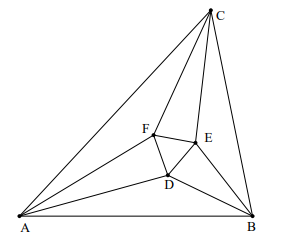 For example, Chao and Gao prove Morley's theorem, which states that given any triangle $ABC$, trisectors of each angle $\angle ABC, \angle CAB, \angle BCA$ meet at an equilateral triangle $DEF$.

Chao and Gao provide a system of about $k=12$ equations in about $n=12$ variables, where the maximum degree $D=5$ and the maximal bit-complexity of the coefficients is $h=\log_2 6$. Thus, the Effective Nullstellensatz bound for Chao and Gao's description of Morley's Theorem is $A_F\le 2^{40}\ll 2^{72}$.

We can look for a solution in $\mathbb{F}_q^n$ to Chao and Gao's polynomials describing Morley's theorem, or, following Huang and Wong, we can decide that the system does have a solution in time $O(\log q)$ without necessarily finding the solution.

Hence, if one uses a SAT-solver to find a solution to Chao and Gao's system of equations for Morley's theorem in $\mathbb{F}_q^n$ for $q$ as the 288-bit prime root||nonce found above at the Bitcoin blockchain of height 520605, or if one uses Huang and Wong's approach, does one then have something close to a probabilistic proof of Morley's theorem, where the probability of being "wrong" is something like $d\times A_F\le 2^{-31}$ or so?

Comment: Even though I've rewritten this, I'm accepting DW's answer as helping to crystallize thinking.

In particular, Theorem 5 of their paper upper-bounds the number of prime numbers $p$ such that the system has a solution modulo $\mathbb{Z}/p\mathbb{Z}$. Suppose this bound is at most $2^{32}$. Then, heuristically (in the random oracle model), that the probability that there exists a prime $q$ that could fool you is at most $2^{32}/2^{72} = 1/2^{40}$. So, the probability you are fooled into thinking the system is satisfiable, when it actually isn't, is at most $1/2^{40}$. This assumes the system of equations is small enough that you can get a small upper-bound on the number of primes $p$, e.g., $2^{32}$ or so. That's a major limitation. Once the upper bound gets large, then you lose all guarantees and the proof probably becomes useless. This is in contrast to the more standard zero-knowledge proof, which doesn't have that problem, since there one can adjust the size of the cryptographic hash to be as large as needed to avoid this problem; with your scheme, we're limited to a 72-bit hash. Given that the upper-bound in Theorem 5 has an exponential dependence on $n$ (the number of equations in the system), I am suspicious that you might very quickly run into this limit and thus that your scheme might become useless in practice for all but the most trivial cases.

Ultimately, I'm not sure how this is better than Koiran's original proposal. I'm not immediately seeing an advantage that would make this more useful in practice.

Not the answer you're looking for? Browse other questions tagged cc.complexity-theory algebra polynomials automated-theorem-proving or ask your own question.