Given N bits on a reversible computer, I want to compute their Hamming weight (into a binary register) while using a minimal number of FullAdder circuits (takes 3 bits, outputs their sum as 2 bits) and while minimizing work space.

For reference, this is what a reversible FullAdder looks like: 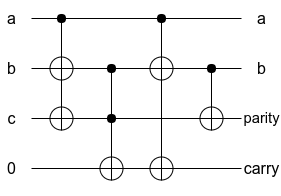 The important thing to notice is that you need an ancilla bit to hold the carry output, and this ancilla bit sticks around until you uncompute the FullAdder. There tends to be a tradeoff between the amount of uncomputation work you do and the maximum number of ancilla you have at any time (see: Pebble Games).

I'm looking for strategies that have interesting tradeoffs between the maximum number of ancillae and the number of FullAdder computations/uncomputations performed, in the context of popcounting a bunch of bits.

I am especially interested in whether or not it is possible to reduce the ancilla usage without increasing the number of FullAdder applications by such a large amount. The underlying context is quantum computation, where error corrected FullAdders are billions of times more expensive than classical ones, so I care about the constant factors.

The inner loop uses $3 \lg N$ adders, and runs $N / \lg N$ times, for a total of $3N$ adders. Half of the $2 \lg N$ ancilla bits are for the result register, and the other half are for the group weight computations.

Basically, using groups of size $\lg N$ instead of $\sqrt{N}$ gives an exponential improvement in space usage but only a constant factor loss in adders.

Not the answer you're looking for? Browse other questions tagged space-time-tradeoff reversible-computing or ask your own question.

14
Space-time tradeoff and the best algorithm
8
Storing a bit vector in uninitialized memory and minimal space
15
Parallel Pebble Game on a Line
7
Are space and time hierarchies even comparable?