Finding a set which dominates the Minimum Dominating Set

Given an unweighted, undirected graph, a dominating set $S$ is a set of nodes such that every node is in $S$ or adjacent to a node in $S$.

My attempt: The following is an algorithm I came up with that I have not proven or found a counterexample for. At the start, all nodes are unmarked.

1) Pick an unmarked node $v$ as a center and mark everything within 2 hops of $v$. EDIT: Instead of picking an arbitrary unmarked node in this step, select the node that would cause the least number of nodes to be marked.

2) Repeat step 1 until all nodes are marked. (Note, this will never place more than $k$ centers)

3) If we have picked less than $k$ centers, keep placing centers on undominated nodes until we have placed $k$ centers.

I have proved that the above algorithm finds a set of centers which dominates a minimum dominating set, under the condition that we don't place any centers in step 3. That is, the algorithm works if steps 1 and 2 manage to place exactly $k$ centers.

Any ideas for whether this algorithm works or a counterexample?

The algorithm previously proposed in the post (before the current edit), does not work.

Here are the problem and algorithm proposed in that version of the post:

output: a set of $k$ nodes that dominates a dominating set of size $k$

At the start, all nodes are unmarked.

1) Pick an unmarked node $v$ as a center and mark everything within 2 hops of $v$. [This step was edited and differs in the current post.]

2) Repeat step 1 until all nodes are marked. (Note, this will never place more than $k$ centers)

3) If we have picked less than $k$ centers, keep placing centers on undominated nodes until we have placed $k$ centers.

Lemma. The algorithm above doesn't work.

Proof. Consider the counter-example $G=(V,E)$ where 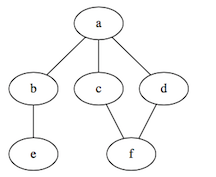 I believe that it is NP-Hard to find the desired set. I had a reduction in mind which on second thoughts was buggy. Will update if I manage to fix the argument.

The greedy algorithm considered by the op (which is the same as one of the standard $k$-center $2$-approximation algorithms) shows that one can find a set of size $k$ that dominates a dominating set of $G$ not in $G$ but in $G^2$ (the square of $G$ or equivalently the $2$-hope neighborhood graph).

Not the answer you're looking for? Browse other questions tagged graph-algorithms np-hardness approximation-algorithms or ask your own question.

9
What's the approximation factor of this Max k-Cut approximation?
3
Finding the nearest node to a given set of nodes in a graph
10
Count $k$-hop neighborhood for every vertex
2
Reducing a minimum cost edge-cover problem to minimum cost weighted bipartie perfect matching
2
Can this special case of Node Weighted Steiner Tree be solved in polynomial time?