What does the category of RDF models look like in Institution Theory?

The Question in short

Here is the question in its pure form. Details of my reasoning can be found below.

The RDF1.1 spec semantics defines a model to consist of a set IR of objects and IP of predicates. The way they define a Model is Isomorphic to the following type definition.

Note that any Model is thus a Quiver as can be seen by noticing that for any $M: RDFModel$ the first and third projections give us the functions we need:

so that the graph representation of a model below is justified.

Anyway since RDFModel is a powerset one can look at it as a poset category where the element Models built from a set of Resources R and Predicates P are the objects, and the morphisms are the subset relations. Call this category $\Bbb{M}_{RP}$

Context of the Question

The RDF1.1 semantic spec comes with a simple model discussed in a previous Stack Exchange question. The aim of this question is to see how that can be brought into the larger space of Category Theoretical Institutional Theory started by the famous computer scientist Joseph Goguen. The longer term aim is to make sense of modal logic in RDF. For a list of academic papers on Category Theory and RDF as well as institutional theory and modal logic see RDF and Institution Theory (IT) message on ncatlab. These papers are good at locating things in the abstract framework, but don't even get into the detail of what the RDF Models are. I just want to make sureI understand correctly what is going on by developing some simple examples.

So here is a simple example Model written out in the structure presented by the RDF1.1 semantic spec. (As we will see a bit further below this can be made a lot easier to understand with arrow diagrams) We need a set of Resources IR, and Predicates IP, so I chose a simple example with 6 objects in IR, 5 Properties in IP and 4 types of relations on IR 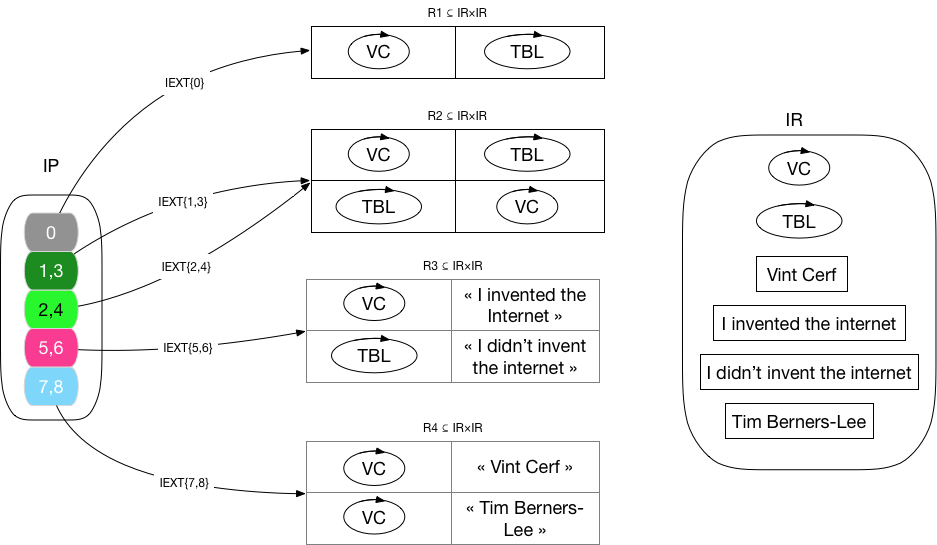 I start with predicates in terms of colors to emphasize that we are dealing with models here. Later we move on to syntax, and so it will be natural to have names for the colored arrows. Initially we just want to say the world contains distinctions. Here the colors represents type of relations, grey {0} for is "older than", dark green {1,3} for "shook hands", light green {2,4} for "knows", pink {5,6} for the relation relating a person to a statement written on their T-Shirt, and light blue {7,8} relating a person to their name (another literal).

So that we can redraw the above diagram in the much clearer category theoretical diagramatic style. We can justify this mathematically because Category Theory defines a Quiver - which other call a Graph, and other call a Directed Graph - as two sets A and N and two functions $domain$ and $codomain$ such that

Clearly we have these here since the first projection of $RdfModel$ could be thought of as the $domain$ and the third projection as the $codomain$ function. Note also that every Quiver gives rise to a free category.

What models add to a Quiver is that it can state that a number of arrows have the same type, which we express here by giving arrows colors.

This image of Vint Cerf shaking hands with Tim Berners-Lee should make it more intutive, and help show why this is useful, as it helps us describe things like Tim meeting Vint. 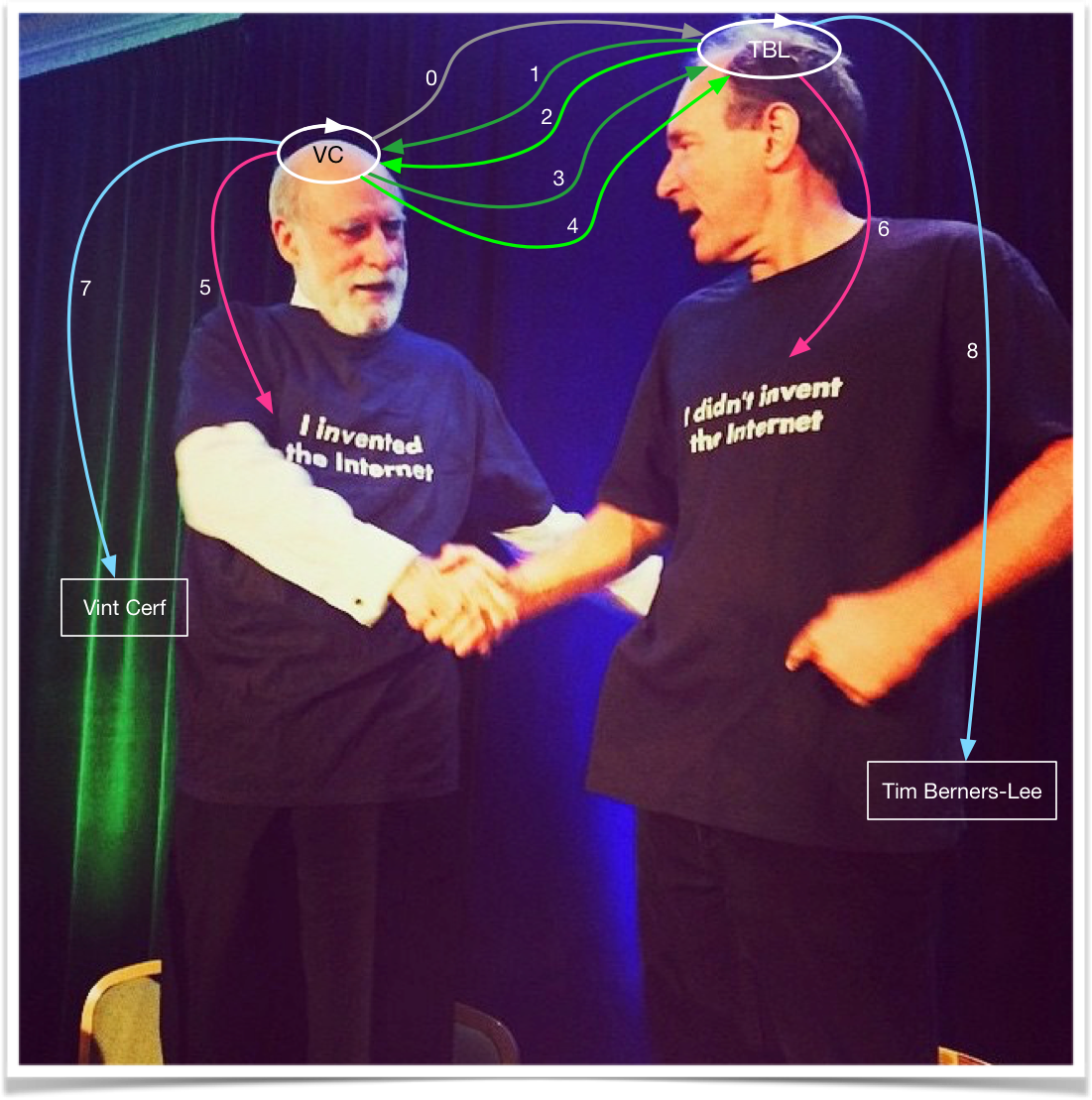 As practical semanticist we like to have non set elements in the sets of our Models to describe practical stuff like that, and that is fine: we have a category of Sets with Ur-elements we can work with.

Ok, that is for an illustrated background.

Now given that any graph is a subset of $IR \times IP \times IR$ we can draw up a simplified version of the relation between all such models using just the subset Partial Order that stems from such a set of subobject (Category Theory's generalisation of the notion of subsets - do we need to generalise? Who knows: it could be useful...). Because this works with powersets and these quickly explode in complexity I have limited myself to 4 elements of IR, to real objects and 2 literals, and 2 types of relations: "older than" and "has name". 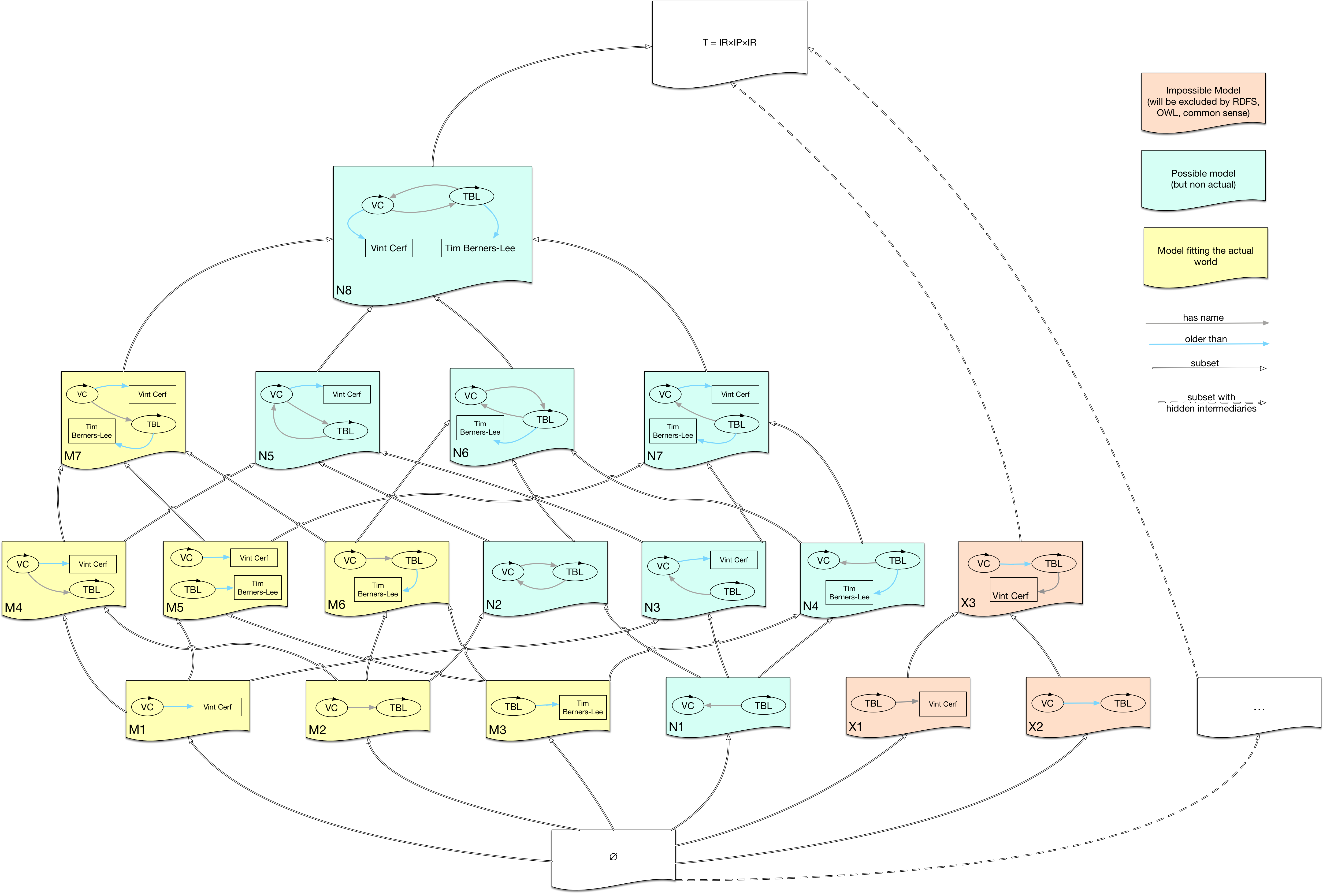 In yellow above are all the models that fit the actual world. The most comprehensive such model is M7. In light blue we have different possible worlds/models (I may be able to have different shades for different incompatible possible worlds there). The biggest graph before Top N8 models worlds where Tim and Vint have the same age, worlds which presumably would require quite a lot of change to the actual one - some complex scenario involving Vint being frozen for over a decade or so before being born... In pink we have models that we don't really want to allow at all, such as model X1 which states that Tim is older than the literal "Vint Cerf", or X2 where Tim is related by the name relation to Vint (but Vint Cerf is a person not a name). X3 is the union of that nonsense (are these what one would term impossible worlds?) RDFS and Description Logic Based OWL vocabularies allow one to exclude those as models, but I think the basic minimal RDF framework does not.

We can see that moving up any arrows into a model (eg M7) is the union of the models into it, which form a logical conjunction or a categorical coproduct. Moving in the opposite direction, say looking at the opposite category we have arrows out of a model such as M7 form its logical disjunctions, or categorical products.

But those papers don't really tell me what such a category of models is. So that's what I am trying to make sure I have understood correctly with the simple example given above.

Now, IT does not state what their set of sentences look like. RDF has so many different syntaxes (RDF/XML, NTriples, Turtle, JSON-LD, ...) to cater to the different (at times religious) fashions that it would be silly to put real syntactic sentences there. Better have sets of Abstract Syntax Graphs as our sentences. As it happens those look very much like our models. If we can distinguish just IRIs and Literals types as defined by IETF and W3C, and just define the type

which clearly is a subcategory of our Models. It would be interesting to regard that indeed as a category, in which case we could get from those to the Set required by Institution Theory by selecting the set of objects $|Sen(\Sigma)|$ of our signature.

So now I suppose if G7 is the top yellow model in the model Poset category above then given that $ ":" : IRIRef \times String \to IRIRef$

is the append operation on the string component of a IRIRef, and we have defined the strings

So I guess now that the category which is the range of the $Mod$ functor - which remember maps each signature $\Sigma$ to a category of models - must be a category with growing number of objects in IR and PR, up to something like infinity. The morphisms in this category would relate one poset category to the next, in a way that is faithful to the poset structure in some way - presumably by keeping the same types of distinctions. (I am not quite sure what this is yet)

There's a lot to unpack here and I don't know about Goguen's institutions. But perhaps I can give a partial answer to your question.

Let's start with "simple interpretations" of RDF, as defined by the spec, forgetting about richer languages like RDFS or OWL. If we ignore IRIs and literals, as in the first part of your question, then an RDF model is a simple object: an edge-labeled graph, whose vertices are resources, edges are triples, and edge labels are predicates.

To view RDF models as a category of models, we can use a variation of the graph indexing category, as discussed, for example, in David Spivak's book on category theory for the sciences. Define a category $\mathbf{RDF}_0$ with three objects $T$, $R$, and $P$, representing the triples, resources, and properties, and three morphisms $subj: T \to R$, $pred: T \to P$, $obj: T \to R$, representing the subject, predicate, and object of a triple. An RDF model is a functor $M: \mathbf{RDF}_0 \to \mathbf{Set}$. There is a functor category of all such models, whose morphisms are natural transformations. Under this definition, a morphism of RDF models is just a label-preserving graph homomorphism.

On this definition, an RDF model, as defined by the "simple interpretations" of the RDF 1.0 spec, is a (coproduct-preserving) functor $M: \mathbf{RDF} \to \mathbf{Set}$. As before, morphisms of RDF models are natural transformations between such functors.

That's all I have time to say right now. If you're interested, I can describe a different way of thinking about this problem that lends itself better to richer systems like RDFS or OWL.

My supervisor thought the problem with the above view of the model from the IT point of view is that it forgets the interpretation part in the range of the Mod functor. Indeed the above definition of Mod takes a signature to a category of pure models. But if one thinks of things this way then one would end up with an Institution being much closer to what David Lewis called a language or indeed we call a language: that is a particular assignment of words/sentences to meanings via a grammar.

If that is correct then the name Mod in institution theory is a bad name for a such a functor, as it suggests a model, and that can be used as say David Lewis would to mean a possible world for example, or sets of those, One would then expect there to many functors from a signature to a model, one for each language, whereas we actually have one mapping from a signature to a category of interpretations. Calling such a Functor $Int$ would be more intutive, but that clashes with the wide useage for integers in computing. So I thought one may want to use the ☿ symbol for Mercury the Roman version of the greek god Hermes, the god of interpretation. The discussion on that subtopic could continue on ncatlab institution entry

Not the answer you're looking for? Browse other questions tagged lo.logic ct.category-theory semantics db.databases modal-logic or ask your own question.

25
What is the folk model of linear logic?
2
how to formalize the class(?) of computational models and their equivalence
15
A mathematical (categorical) description of type classes
8
Categories a computer scientist should know about
8
A bicartesian closed category of strict complete partial orders (Hask)
6
What is the impact of encodings of sparse structures on the complexity of the model checking problem?