Suppose we have a ground set of $n$ elements and $m$ sets are defined over them $S_i \subseteq [n]$. Think of the following procedure: At each step take two of the sets, take the union, and add the union back to the pool of all sets. Obviously at each step two sets are taken and one is added. Therefore after exactly $m-1$ operations only one set is left which is the union of all sets $\cup_i S_i$. We want to do this procedure to minimize the total cost. Suppose that if we take the union of two sets $A, B$ the cost will be $|A|+|B|$. This is somewhat similar to matrix chain multiplication, but the order is not predefined.

Now this procedure can be thought of as a tree in the following sense: We start with the leaves of the tree which are the original sets and at each step we merge two, create a parent for these two sets, and repeat the process repeatedly until we end up with the root of the tree. The cost of the tree is drfinef as the sum of sizes of all nodes. The problem is to build it such that the total cost is minimum. Here is an illustration of a tree for four sets $S_1, S_2, S_3, S_4$: 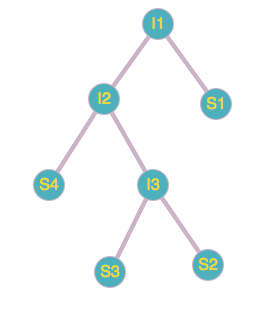 The motivation for studying this problem is that it can be thought of as compression scheme for an array of sets. Using this tree we will be able to query things like "does item $i$ belong to $S_j$?". The reason it's a compression is because we can store the elements of each node in a rank/select DS and use the rank/select operations by walking from the root down the leaf corresponding to $S_j$. There are rank/select data structures that are roughly of memory complexity $O(|S_j|)$ and hence the cost that we are minimizing. Here are possible approaches to tackle this problem:

1. Greedy The obvious greedy thing to do is to chose the pair $S_v, S_u$ such that $|S_u \cup S_v|$ is minimized. This can be shown that this is not globally optimal. Can it be proven to be in a certain proximity of the global solution?

Browse other questions tagged optimization tree binary-trees set-system or ask your own question.