Is this partition problem strongly NP-complete?

Some computational problems have variants that appear to be harder. For instance, Graph Automorphism (GA) problem has quasi-polynomial time algorithm ( by Babai's Graph Isomorphism result) while the fixed-point free GA problem is NP-complete.

Partition problem is weakly NP-complete problem since it has pseudo-polynomial time algorithm. I am interested in variants that are strongly NP-complete.

Here is a variant of partition problem:

Query: Is there a partition of $S$ into two equal cardinality parts $A$ and $S-A$ such that both parts have the same sum and no pair in $P$ has both elements in one side of the partition?

Is this variant of partition problem NP-complete in the strong sense?

This was posted first on Math overflow (I believe the posted answer is incorrect since the proposed dynamic programming algorithm does not take into consideration the cardinality of $P$).

This is the idea: you can view the $2N$ integers as nodes of a graph $G$, the pairs in $P$ indentify the edges between the nodes.

Clearly $G$ cannot contain cycles of odd length (checkable in polynomial time); otherwise there would be a conflict and at least one element should be excluded from the partition $A$ vs $S \setminus A$.

We finally build a Partition problem with the elements:

Very informally: if $h_i$ is placed on one side, it also carries the $w_i$ (positive) "weight" that keeps track of the (absolute) difference between the number of elements of $H_i'$ and $H_i''$; so on the opposite side both the sum and the weight must be "balanced" and this ensures that a solution leads to a valid equal size partition also on the original problem. In the original problem we can derive $A$ from $B_1$: if $h_i$ (or $a_j$) is placed on $B_1$ then the integer nodes of the bipartite component $H_i$ must be arranged in such a way that $A$ recieves the elements from $H_i'$ or $H_i''$ according to which have the greater sum. 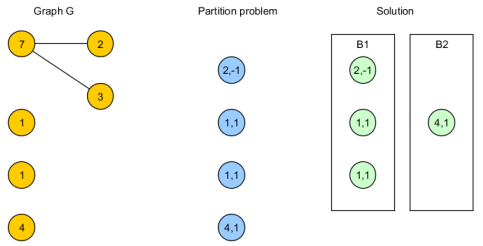 You can also apply the Partition problem pseudo-polynomial time dynamic programming algorithm to the set $B$ to find the solution.

One of the NP-complete problems listed in the book by Garey and Johnson is EVEN-ODD-PARTITION:

Take an arbitrary instance of EVEN-ODD-PARTITION and construct the following instance of your partition problem from it:

Hence your problem is NP-complete.

Not the answer you're looking for? Browse other questions tagged cc.complexity-theory partition-problem or ask your own question.