Star seperators to explain computational complexity of algorithms on a class of graphs?

A lot of NP-hard optimization problems on graphs which are perfect become solvable in polynomial time. Unfortunately, the class of graphs that arise in my problem are not perfect. The graphs can be easily shown to be imperfect yet the mathematical programming implementation of several supposedly np-hard problems return optimal solutions in near instant time for problems with very large size (millions of nodes, millions of edges). Does there exist some explanation in terms of graph decomposition to explain this?

The class of graphs for which I am working with do not yield clique separators nor do they seem to have an easy tree representation. I wanted to ask if there existed some methodology (in terms of decomposition maybe?) to explain the behaviour that I have encountered in the same vein of those above. For graphs that possess some other type of special structure to those previously mentioned. For context, I am neither a graph theorist or computer scientist so have very little competence in this stuff, I am actually an engineer working on a complex design problem which can, in a sense, be reduced down to maximum independent set on the class of graphs explained below:

The most I have been able to achieve is that if we let $G = (V,E)$ be a graph of the class, there always exists a partition with a star cut-set/separator which lets call $S$ whose deletion $G/S$ results in 2 disconnected sub-components $A$ and $B$ where $A$ is a clique and $B$ $U$ $S$ is either connected and possesses a star separator or is a clique. Basically, the graphs can always be represented in a way by a binary decomposition tree where the leaf atoms/nodes are all cliques and the articulation vertices are star separators. $K$ is a clique 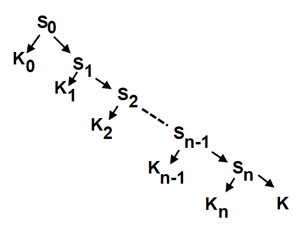