A game on several graphs

Consider the following game on a directed weighted graph $G$ with a chip at some node.

There are two players Alice and Bob. The goal of Alice (Bob) is to shift the chip to a node that marked by A (B).

Initially Alice and Bob have $m_A$ and $m_B$ dollars respectively.

If a player is in a losing position (i.e., current position of the chip is marked by opposite letter) he or she can move the chip to a neighboring node. Such move costs some dollars (the weight of the corresponding edge).

The player loses if he or she is in a losing position and has not money to fix it.

Now consider the language GAME that consists of all directed weighted graphs $G$ (all weights are positive integers), initial position of the chip, and capitals of Alice and Bob that are given in the unary representation

such that Alice has a wining strategy at this game.

Now consider the following generalization of this game. Consider several directed weighted graphs $G_1, \ldots G_n$ with a chip at each graph. All nodes of all graphs are marked by A and B. Now Bob wins if all chips are marked by B and Alice wins if at least one chip marked by A.

Consider the language MULTI-GAME that consists of all graphs $G_1, \ldots, G_n$, initial positions and capitals $m_A$ and $m_B$ (in the unary representation) such that Alice wins at the corresponding game. Here it is important that capitals are common for all graphs so, it is not just several independent GAMEs.

Question What is the complexity of the language MULTI-GAMES? (Is it also belongs to P or there are some reasons to thing that this problem is hard?)

UPD1 Neal Young suggested to use Conway's theory. However I do not know is it possible to use this theory for several games with common capital. 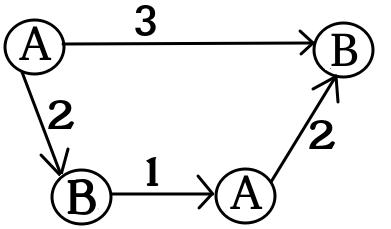 UPD3 Since the question for arbitrary graphs seems difficult consider specific graphs. Denote the nodes of some graph $G_i$ as $1, \ldots k$. My restriction is the following: for every pair $i<j$ there exists edge from $i$ to $j$ and there is no the reverse edge. Also there exists a restriction for the costs of edges: for $i<j<k$ the edge $j$ to $k$ is not greater than from $i$ to $k$.

Since Steven Stadnicki's answer doesn't appear to have been accepted by the asker, I figured it may still be helpful to provide an update: I have a reduction from 3SAT to MULTI-GAME. I haven't looked at Steven's answer carefully or followed through the link he provided, but based on the following reduction I won't be surprised if MULTI-GAME is indeed PSPACE-complete. I might not bother extending this result beyond NP-hardness, however.

Given such a 3SAT instance, the reduction creates a MULTI-GAME instance consisting of $n + 1$ games -- one for each variable and another game used as an excess capital sink. First we'll define the structure of the graphs for each game, then look at an example and discuss the core idea, and then we'll figure out what exact costs to assign to the edges to make the reduction hold firm.

First, the variable game graph $G_j$ for each variable $x_j$:

This is a lot to take in, so hopefully an example makes this a little more digestible. Our 3SAT instance is as follows: 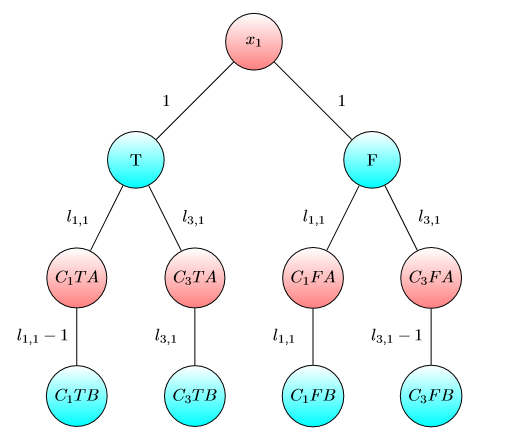 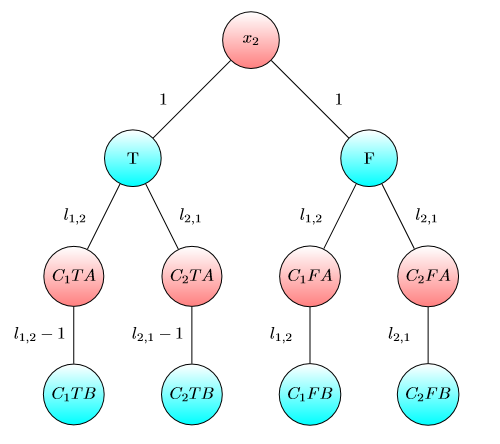 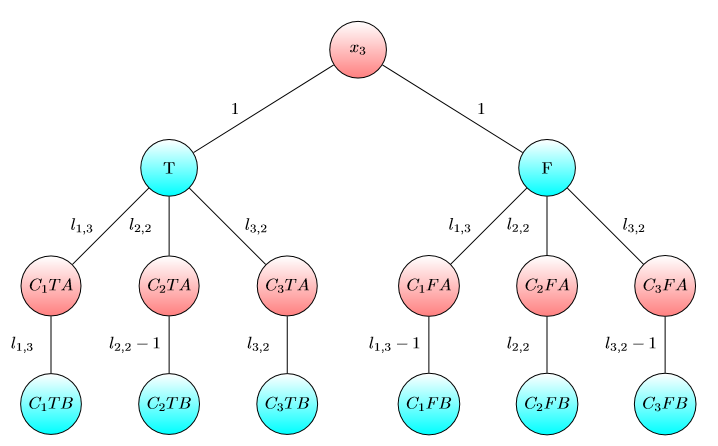 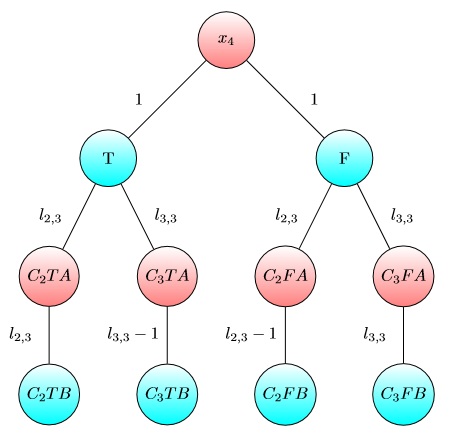 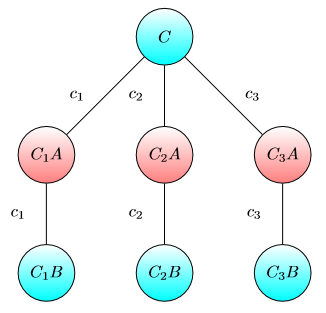 The idea is as follows:

Bob is forced to make the first $n$ moves in order to get out of losing positions in the $n$ variable games. Each such move encodes an assignment of true or false to the corresponding variable.

($C_i?A$ denotes either $C_iTA$ or $C_iFA$, only one of which is reachable in a given variable game after Bob's opening moves.)

If Bob's opening corresponds to a truth assignment that leaves some clause $C_i$ unsatisfied, then Alice choosing $C_i$ and implementing the strategy above costs Alice $l_{i1} + l_{i2} + l_{i3} + c_i$ capital to implement, and Bob the same to beat; if on the other hand $C_i$ is satisfied, then Bob's counterplay gets a discount of at least $1$. Our goal in setting the $c_i$ and $l_{ik}$ values and Alice and Bob's starting capitals is to ensure that said discount is the deciding factor in whether Alice or Bob wins.

Note that all of these values are polynomial in $m$, so the MULTI-GAME instance outputted by the reduction has size polynomial in the size of the 3SAT instance even if these costs are encoded in unary.

First of all, it is immediately clear that if Bob's opening defines a truth assignment that leaves a clause $C_i$ unsatisfied, then Alice wins using her clause $C_i$ strategy given above.

If Bob's opening satisies all clauses, we can argue constraints on Alice's options which rule out any other possibility of Alice winning. Note that the order in which Alice makes her moves is irrelevant, as Bob's responses are forced and the total capital Bob will require to respond to Alice's moves is unchanged by the order of Alice's moves.

Similar arguments should establish that Alice must select the moves costing $l_{i2}$ and $l_{i1}$. If Bob's truth assignment satisfies $C_i$, then even this strategy doesn't work, as the discount Bob gets on one of the $l_{ik}$-based costs makes up for the $1$ less capital he has after his opening.

A remark on my previous answer: it's obvious in hindsight that, for the TABLE-GAME variant of MULTI-GAME I defined in the comments of that answer, a knapsack-style DP suffices to determine which player has a winning strategy. You can argue that Bob's best strategy is to always respond to a losing state in a given game table with the minimal investment possible (this can't cut off a subsequent move for Bob that he would have otherwise), and from there that the order of Alice's moves doesn't matter. It then becomes a matter of choosing a split of Alice's capital among the games such that the sum of Bob's minimal winning responses over those games exceeds his budget, which can be reframed as a knapsack-style problem, which has a polynomial-time DP due to the unary representation of costs. (My recurrence actually would've worked for TABLE-GAME if I framed it in terms of Alice.)

It turns out that even a simple tree structure for each game, with constant depth and really only one meaningful fork per game (namely those at the start which force Bob to choose a truth assignment) is sufficient to get NP-hardness. I had some ideas for getting rid of that initial fork, which stalled out at somehow forcing Bob to invest a relatively large fixed amount of capital in $n$ games without Alice having to precommit to those games in advance, but obviously since TABLE-GAME is in P this is not possible without the fork.

I haven't thought much about your special case from UPD3. I suspect it's also NP-hard, for the reason that my variable gadgets seem at a glance like they may be adaptable to those constraints, but I probably won't look into it further.

Update: likely incorrect, leaving up for now as a record of having explored an avenue. See comments.

I don't see an immediate way to salvage this approach. Reversing the order of quantification on $u$ and $v$ makes the recurrence fail on the instance in update 2 of the question post.

Per my comments above, here's a reduction that I think shows the problem to be PSPACE-hard (and presumably complete). Let $[n]$ be the graph with $n+1$ nodes, numbered $n\ldots 0$, with a link from node $i+1$ to $i$ for all $0\leq i\lt n$, all nodes other than $0$ marked for A, node $0$ marked for B, and the chit initially pleased on $n$. (All edges here have cost 1). It should be clear that B wins $[n]$ iff they have $\geq n$ dollars. (If need be, we can give unit-cost edges from each node other than $0$ to itself, since A will always want to keep the chit as far from $0$ as possible and B will always want to move it closer; indeed, if self-links aren't allowed then we can 'double up' the line into two copies, forming a ladder with bidirectional links.

Now, consider the graph $G$ with two additional nodes $\alpha$ and $\beta$: node $\alpha$ links to some $[i]$ and to $\beta$, and node $\beta$ has links to $[j]$ and $[k]$ (Presume that $j\lt k$). All of these links have cost zero. (This isn't strictly necessary for the reduction, but it's convenient.) Both $\alpha$ and $\beta$ are marked for A. Clearly from $\beta$ B will want to go to $[j]$ whereas A will want to go to $[k]$ (A would prefer not to move at all, but it can be worth moving to $[k]$ to make the cost higher for B). Similarly, it can be arranged that B never wants to move to $[i]$ and that A always wants to. Then the game-theoretical value of these positions is $\{i\mid\{j\mid k\}\}$. But it's known that establishing the value of a sum of games (i.e. graphs) of this type is PSPACE-complete; this was shown in Laura Jo Yedwah's Masters' thesis. So your problem is at least PSPACE-hard.

Not the answer you're looking for? Browse other questions tagged cc.complexity-theory complexity-classes gt.game-theory or ask your own question.

69
Which interesting theorems in TCS rely on the Axiom of Choice? (Or alternatively, the Axiom of Determinacy?)
5
Is this game solvable?
20
Permutation game redux
11
Is there a simple game with asymmetric complexity?
5
Communication complexity of Independent Set game?
4
Verifying that a reduction is correct
10
Is this game EXPSPACE-complete?
10
What is the complexity of this game?