Lighting up all elements of a poset by toggling upsets

My goal is to switch on all elements of the poset, i.e., find a sequence of moves that reaches $S = P$, from the initial configuration $S = \emptyset$. However, I impose that for each element $x$, all my plays on $x$ in the sequence are of the same type, i.e., if I play an on-move on $x$ then I am not allowed to play an off-move on $x$ at any point of the sequence -- but I can play other on-moves on $x$ if I want. (If we don't impose this, then it's not too hard to show by induction that we can always win.)

My question is: What are the posets on which there is a way to win the game? In particular, can we always win when $P$ is a join-semilattice, i.e., any nonempty subset of elements has a least upper bound?

For a simple example of the game, consider $P$ with the following Hasse diagram:

I have animated a winning strategy on the picture. Initially all vertices are off (=white). Then we do the following:

For a more complicated example, consider the following:

There is a relationship between the game and the Möbius inversion formula on posets. Specifically, if I define $\mu(x) = 1 - \sum_{y < x} \mu(y)$, in particular $\mu(x) = 1$ if $x$ has no ancestors, then the sign and absolute value of $\mu(x)$ tells me which types of move I should play on $x$, and how many. In particular when $\mu(x) = 0$, we should never play on $x$, as with the vertex $H$ in the example above. Another way to see this is about a restricted way to compute the inclusion-exclusion formula with no cancellations.

I already know that we cannot win on every poset, as a computer search by Louis Jachiet turned out the following poset, where there is no winning strategy (checked by exhaustive search). There is no counterexample with less than 9 elements: 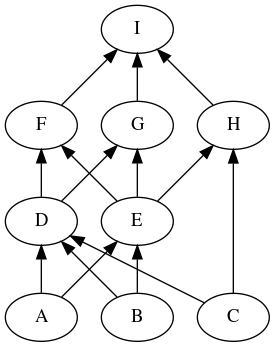 For our purposes we are interested in knowing whether the game can always be won on join-semilattices, i.e., every nonempty set of elements has a least upper bound (i.e., a unique descendant which is as high as possible). This is not the case above (consider $A$ and $B$), and this requirement seems to constrain the structure of the graph, but we don't know how to prove the claim (or whether it is true). We have been running a computer search for join-semilattices on which the game cannot be won, but we haven't found a counterexample yet.

As for the motivation of the problem, it was originally about expressing certain kinds of Boolean functions using restricted classes of circuits, with connections to safe queries over probabilistic databases.

Co-worker here. We haven't solved it yet, but here are a few remarks (in case it gives anyone an idea, because we are stuck).

This concludes the proof of claim (*).

Claim (*) implies in particular that join-semilattices that are obtained from dismantable lattices by removing the bottom element are winnable; these are lattices that can be emptied by recursively removing the doubly irreducible elements, see Kelly, David; Rival, Ivan, Crowns, fences, and dismantlable lattices, Can. J. Math. 26, 1257-1271 (1974). This paper shows in particular that dismantable lattices are exactly the lattices that are crown-free (see the paper for the definition), so if we want to solve our problem for join-semilattices only (instead of for all posets), it becomes equivalent to the following:

Other than claim (*), we have some code (there) to decide if a given poset is winnable or not, and if yes to visualize the winning strategy. In particular we have generated a lot of join-semilattices and found no counter-example so far.

We are also working on a generalization of this problem: see this note.

Not the answer you're looking for? Browse other questions tagged graph-theory boolean-functions directed-acyclic-graph partial-order order-theory or ask your own question.

3
My exact divide-conquer algorithm for counting antichain in a poset?
12
Minimal elements of a monotonic predicate over the powerset $2^{|n|}$
15
Worst number of questions needed to learn a monotonic predicate over a poset
7
Complexity of counting poset automorphisms
13
Lexicographically minimal topological sort of a labeled DAG
11
Determining what can be achieved by a permutation of elements of a noncommutative group
12
Enumerating topological sorts of a vertex-labeled DAG