I have the following problem which came as a subproblem in some work I was doing and I am completely stuck. Note that I am interested in it only in terms of worst case time complexity (not heuristics or anything else).

Given is a set $\mathcal{P}$ of $m$ convex polygons with $n$ overall vertices.

In the following example, the set Z would consist of the 4 highlighted polygons 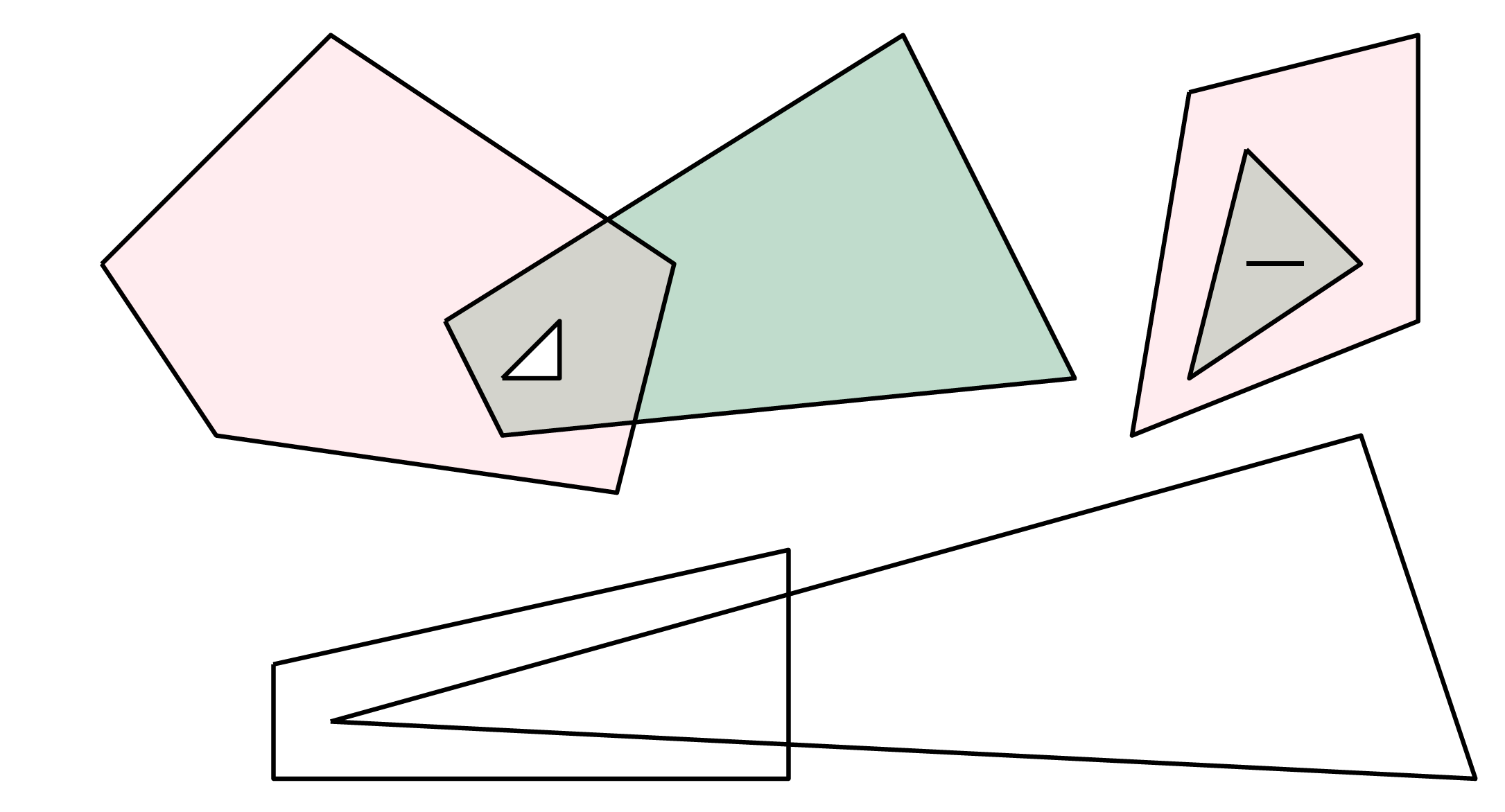 Some thoughts I had were:

I would be extremely happy to have an $O((1+|Z|) n\log^2 n)$ time algorithm. I am not positive about that anymore. So, I would be happy with any algorithm or ideas how to further proceed.

Finally, and perhaps as a starting point, one could consider the simplified decision problem.

What would be an efficient algorithm for that?

Here's an argument that you need time quadratic in the number of polygons. More precisely, you should not be able to find containing pairs among $n$ $k$-sided polygons in time $O(n^{2-\epsilon})$, for any $k=O(n^{\delta})$ and any $\epsilon,\delta>0$ It's a reduction from the orthogonal vectors problem, the problem of finding two disjoint binary vectors among a set of $n$ $k$-dimensional binary vectors, for which the non-existence of an algorithm with time $O(n^{2-\epsilon})$ is a standard conjecture in fine-grained complexity (see e.g. Abboud et al, "More consequences of falsifying SETH and the orthogonal vectors conjecture"). Here orthogonality is measured in $\mathbb{Z}^k$, i.e. it means that the vectors have disjoint subsets of nonzero coordinates.

Given a set of vectors among which we wish to find an orthogonal pair, consider a regular $k$-gon $P$, whose vertices correspond to the coefficients of our vectors. For each vector $x$ construct a polygon $p(x)$ as the convex hull of the $k$-gon vertices for which $x$ has a nonzero coefficient. To make sure that none of these polygons contains each other, shrink each $k$-gon by a factor $1-\gamma |x|$ for some very small number $\gamma$, so that when one vector is dominated by another its polygon is shrunk more.

Next, form two more regular $k$-gons $Q$ and $R$, concentric with $P$, where $Q$ is slightly smaller than $P$ (so that all its vertices are inside the shrunken copies of vertices of $P$) and $R$ is slightly bigger (both close enough that the construction below produces convex polygons). For each vector $x$, construct a second polygon $q(x)$, a convex $k$-gon that, on each ray from the origin through a vertex of $P$, $Q$, and $R$, chooses either a vertex of $Q$ or $R$: a vertex of $Q$ when the corresponding coefficient of $x$ is nonzero, and a vertex of $R$ when it is zero. We can make sure that all vectors have at least one zero coefficient in order to ensure that no $q(x)$ is contained inside a $p(y)$, and we can do the same variable-shrinking trick to ensure that no two $q$'s are nested.

With this construction, the only remaining containments of polygons are that a polygon $q(x)$ contains another polygon $p(y)$. This happens if and only if $x$ and $y$ are orthogonal. So if we could solve your polygon question in sub-quadratic time, we could also solve the orthogonal vectors problem in sub-quadratic time, conjectured to be impossible.

Not the answer you're looking for? Browse other questions tagged ds.algorithms computational-geometry polygon convex-hull or ask your own question.