Nearest neighbor searches in kd-trees run in logarithmic time, as shown by Friedman et al. However, I have some difficulty to fully understand the proof.

$S_m(X_q)$ is the smallest ball centered at the query point $X_q$ that exactly contains the $m$ points closest to $X_q$.

I don’t get why only the regions overlapping $S_m(X_q)$ are examined. Consider the following example, where we want to compute the black point that is closest to the orange point $X_q$. $S_m(X_q)$ is the green circle in this case, so according to the proof the algorithm should only search both lower buckets. 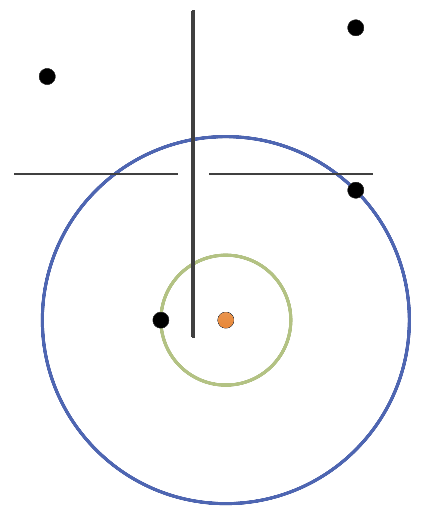 However, the searching algorithm will find as first candidate solution the black point in the lower right region. Then, it will also search regions that intersect the blue circle, in particular the upper right region.

So, isn't it too restricted to compute only the buckets that intersect the green circle?

10
Costs of performing approx. nearest neighbor search in a skip quadtree
4
Does kd tree requires triangular inequality for finding k-nearest neighbors
9
Calculating the distance to the kth nearest neighbor for all points in the set
8
Dynamic planar exact k-nearest neighbors for pathological data
22
Detecting two kinds of almost-simple polygons
1
Simple k-nearest-neighbor algorithm for euclidean data with highly variable density?
21
Maximum disjoint set: what is the actual approximation factor of the greedy algorithm?
2
What is the proof that visibility graphs can be used to compute the shortest path?