Finding the distance between two polynomials (represented as trees)

A colleague who works on genetic programming asked me the following question. I first tried to solve it based on a greedy approach, but on a second thought, I found a counterexample to the greedy algorithm. So, I thought it's worth mentioning here.

Consider two polynomials which are represented by their expression trees. For instance, $x^3-2x+1$ and $x^2 + 4$ are illustrated below: 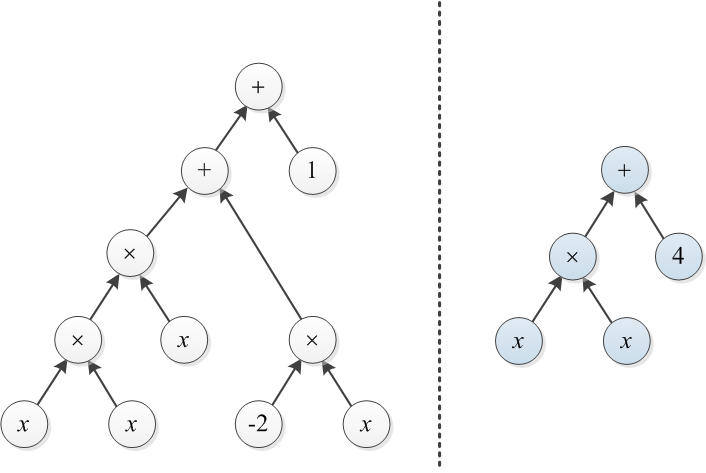 On a node N of the tree, define the basic operation as follows:

The cost of the basic operation of type 1 is 1. The cost for type 2 is equal to the number of {+,-,×} operations in the newly built expression tree.

Example for type 2: The cost of the following basic operation is 2, since the expression tree built on top of node N uses two operations (- and ×).

Let T1 and T2 be two expression trees representing polynomials. Define the distance of T1 and T2 as follows: the minimum cost of basic operations for converting T1 to T2. Note that we don't require the converted tree to have the same structure as T2. We just want it to compute the same polynomial as T2. (See the comments for an example.)

The problem: Given T1 and T2, present an algorithm which computes their distance.

Example 1: Let T1 and T2 are the two trees illustrated at the beginning of this post. To convert the right tree to the left tree, one can build a tree of cost 3 on top of ×, and change 4 to 1 (the total cost is 4). 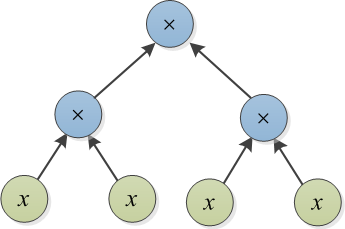 Tree Edit Distance is a generalization of string edit distance. The distance between two trees is the minimum number of node insertions \ deletions \ and relabels required to turn one tree into the other. (when we delete node v, v's children become children of parent(v)). The problem is NP-hard when the trees are unordered, but when they are ordered (i.e., there is a left-to-right order among siblings) the problem is solvable in O(n^3) time (as in the paper that Sadeq mentioned). A good survey that describes this: http://portal.acm.org/citation.cfm?id=1085283

Not the answer you're looking for? Browse other questions tagged ds.algorithms tree ai.artificial-intel genetic-programming or ask your own question.

8
What is the initialization time of a link-cut tree?
9
Finding optimal parallelization from general weighted undirected graph
1
Task Multithreading analysis for a Divide and Conquer algorithm
1
Minmax vs Maxmin
7
How fast can we find and disconnect roots in a forest?