How to calculate complexity in a high dimensional space?

Edit: 'Fitness landscape analysis' was mentioned as a relevant measure. If you're going to downvote the post, at least leave a comment what is wrong.

For a specific f(), I'm defining a term 'complexity', estimating how difficult is the given function to optimize. I attempted a solution in low dimension, but I might not be on the right track to generalize to n-dimn. This concept probably has a name and a better existing approximation, but here's what I have:

If it's easy to achieve an output of 1 through any random input, then you have a low complexity space.

An example f() space, where all input values result in z=1 (low complexity): 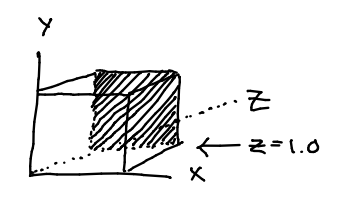 An example f() space, where only one input value results in z=1 (high complexity): 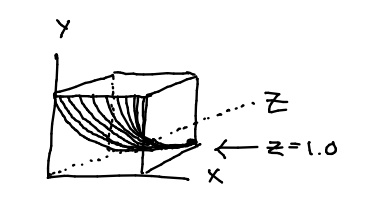 Complexity measured as volume enclosed between the xy-plane and the z-hyperplane seems valuable, but it alone does not work, because increasing volume at z=0.8 depth is 'worth more' than the same amount increased at 0.2 depth (in terms of optimizing for z=1). It's not just the z=1 region that is important as 'success', but also where z=0.9, z=0.8, etc. proportionally.

There's a problem that local minima can cause increased volume (lower complexity), yet lead away and make it more difficult to navigate toward any deeper / global min's (higher complexity). (Weighted volume might handle this, but I'm unsure)

Example f() space where both have the same volume (picture's not exact, but you get it right? and I rotated axes, sry):

How can I incorporate that factor, that some points on the function increase volume, but the addition of that volume contributes less than if the volume was adjacent to a deeper space (in a similar function, ex. the f() on the right, above)? It seems like the critical feature that distinguishes those two hyperplanes is that the sign of the slope flips, where the negative slope leads into a local min, away from the global min, and the more frequently the sign flips, the harder the function will be to optimize.

If I iterate the grid rows and cols, and calculate the number of slope sign changes, that might be useful, or there might be a way to use trig to project a line and see what depth it intersects the hyperplane, but this is where I realized I need help.

My original idea was to define complexity as how resistant are the output values to fluctuations in the input values, given a specific input. So I have a decent estimate with my 'weighted-volume' calculation, but it's still lacking.

(1) Do you recognize the 'complexity' concept as another existing term?

(2) If not, can I improve beyond 'weighted-volume'?

(3) Will this work for higher dimensions?

As far as I have understood, you aim to develop a framework to capture the hardness of combinatorial problems in 3D. However, there are major problems in your question.

Your first sentence lacks a couple of technical definitions:

For a specific f(), I'm defining a term 'complexity', estimating how difficult is the given function to optimize.

First, and the most important of all, you should have a well defined complexity measure in order to adapt the term. Then, another sentence makes your question even more complicated:

If it's easy to achieve an output of 1 through any random input, then you have a low complexity space.

Here, you need to have a clear definition of easy. Is it in terms of computational complexity? If so, how do you measure the input size?

After this sentence, I am honestly lost:

Complexity measured as volume enclosed between the xy-plane and the z-hyperplane seems valuable, but it alone does not work, because increasing volume at z=0.8 depth is 'worth more' than the same amount increased at 0.2 depth (in terms of optimizing for z=1). It's not just the z=1 region that is important as 'success', but also where z=0.9, z=0.8, etc. proportionally.

What does it mean to worth more? What is increasing, and what is decreasing? What are yoou trying to optimize?

All in all, although I could not understand your question well enough, I would go ahead and say that there are different ways to measure "complexity" in different dimensions, unless you invent a brand new system to represent the coordinates.

Not the answer you're looking for? Browse other questions tagged cc.complexity-theory optimization machine-learning computational-geometry high-dimensional-geometry or ask your own question.

14
Early history of certain results on space-time tradeoffs?
4
Are there perceptrons that maximize the average margin, rather than the minimum?
4
How to compute the disagreement between hypotheses
11
Given $f:\{0,1\}^n \rightarrow \{-1,1\}$, find a subcube with large volume and large average value
20
How to prove that USTCONN requires logarithmic space?
12
Complexity of testing if two sets of $m$ points in $\mathbb{R}^n$ differ only by rotation?
2
An equation relating Time complexity, Space complexity, and entropy of output
1
Embedding a n-tree into a b-dimensional space