I struggle with the proof of Lemma 1 in the Paper "Hedging Uncertainty: Approximation Algorithms for Stochastic Optimization Problems" by Ravi and Sinha and hope this is the right community to ask for help.

Problem setting: There is a graph $G(V,E)$ with edge costs $c_e$ and a source vertex $s \in V$. Now there are $m$ scenarios for the second stage, with scenario $k$ specified by a destination vertex $t_k \in V$, a multiplicative cost scale factor $f_k$ and a probability $p_k$ with which the scenario occurs. If we chose a set of edges $E' \subset E$ in the first stage they have the cost $\sum_{e \in E'}c_e$. Then in the second stage a scenario $k$ occurs and we have to calculate a second stage solution for the shortest path $P_k$ between $s$ and $t_k$. We assume that the edges of the first stage ($E'$) have now cost zero while the remaining edge costs increase by $f_k$. This results in the following total first and second stage costs: $$\sum_{e \in E'}c_e + f_k \sum_{e \in P_k \setminus E'}c_e$$ The objective is to find the edge-subset $E'$ that minimizes the total costs.

Lemma: Now they say that there exists an optimum solution where the set $E'$ induces a tree containing the source $s$. I copy their proof here for simplicity: 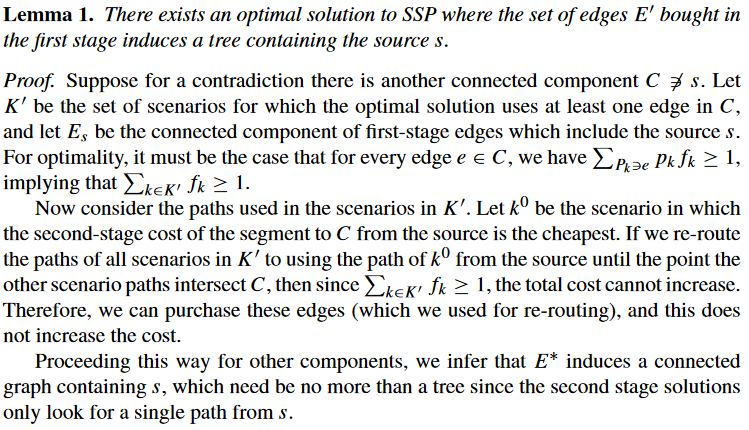 My problems and thoughts:

Thank you in advance

Browse other questions tagged graph-theory tree proofs shortest-path or ask your own question.