Is the following optimization problem NP-hard?

Motivation: Assume the edge orientation does not induce any cycle of length 3, then the following algorithm lists all triangles in the input undirected graph in linear memory and in time $O(\sum_\limits{v\in V} ~d_{out}(v)\times d_{in}(v)+m+n)$ where $m$ is the number of edges and $n$ is the number of nodes.

Implementation details: the graph should be stored in a CSR-like format and, in addition, the edges of the input undirected graph should be put in a hashtable.
Finding the edge orientation that minimizes the quantity should lead to a faster algorithm. I think that the constraint "no induced cycle of length 3" is too complicated and, as a stepping stone, I've decided to formulate the above problem.
The question is related to that one where the edge orientation has to induce a DAG.

Another formulation: The problem can be written as the following Integer Quadratic Programming.

I believe that this problem is NP-hard, here is a sketch proof (don't hesitate to ask for more details if needed).

The idea is based on a reduction from the Not-all-equal 3-SAT. For $\varphi$ a 3-SAT formula with $m$ clauses, we will build $G(\varphi)$ a graph that has minimum objective value of $2\times m$ iif $\varphi$ has a solution. Before diving into the building of $G(\varphi)$ let us show the gadgets that we will use.

Clause gadget: The idea here is slightly more intricate. For each clause $C_j = l_1 \lor l_2 \lor l_3$ we will create three nodes $C_j^1$, $C_j^2$ and $C_j^3$ which are the red nodes in the graph drawn below. In this graph the three blue nodes will correspond to the three literals $l_1$, $l_2$ and $l_3$. Since the literals will be fixed nodes, we know the orientation for the blue-red edges (i.e. the dashed edges) and we want to compute the orientation of the red-red edges (i.e. the filled edges) that minimizes the objective value. 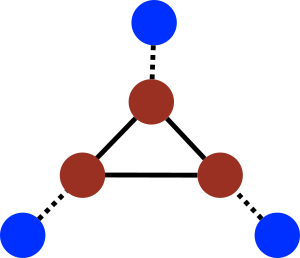 Putting everything together: If there is a solution to the not-all-equal problem we can orient the edges outward for true literals and inward for false literals and each clause triangle can be oriented in a way to have an error of $2$, therefore the overall error is $2\times m$. On the converse, if there is an orientation with error less or equal to $2\times m$ then we can retrieve a solution to the not-all-equal problem. Indeed, the fixed nodes have an in or out degree of 0 therefore we can say that literals with in degree equal to zero are true and the other are false. Since each literal is connected to its negation their value are coherent and it is a solution to the not-all-equal problem $\varphi$ because since each triangle clause has error at least 2 and the overall error is $2\times m$ it means that all triangle clauses are connected to a positive and a negative literal.

Not the answer you're looking for? Browse other questions tagged graph-theory graph-algorithms np-hardness optimization integer-programming or ask your own question.

9
When does a graph admit an orientation in which there is at most one s-t walk?
18
Reference for mixed graph acyclicity testing algorithm?
4
Optimization Problem on a Directed Graph
8
Is this vertex ordering optimization NP-Hard?
3
What is the complexity of this weighted b-edge matching problem?
10
Is the following graph optimization problem approximable within a constant factor?
6
Is that edge orientation optimization problem NP-hard?